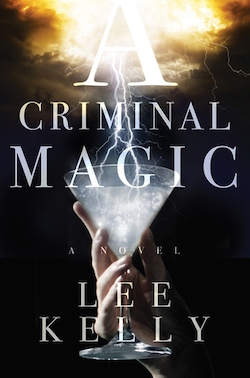 Thanks to the passage of the 18th Amendment, magic is finally illegal. But making something illegal doesn’t make it disappear–it just makes it sexier and, for two unlikely sorcerers, that much more dangerous.

Joan Kendrick has seen firsthand how damaging magical shine can be. It is more potent than liquor, more addictive than narcotics, and in the wrong hands it can be deadly. When it looks like magic might be the only way to save her family’s home, Joan forges a risky bargain. If Joan can learn to harness her magic it could change everything. But only if she can stay alive long enough to enjoy it.

Magic has taken everything from Alex Danfrey forever changing the trajectory of his life, landing his father in prison, and even ruining Alex’s own good name. Alex never wanted to work as an undercover prohibition agent–certainly not one peddling magic for the head of the Shaw crime syndicate. But who is he to turn down the one chance he has to turn his life around?

Joan and Alex are on opposite sides in a battle that’s been threatening to erupt for years. When lines are drawn both of them will have to determine where the others’ loyalties–and their trust–truly lies in A Criminal Magic (2016) by Lee Kelly.

Kelly’s unique vision of magic and magical distillation adds an interesting element to the world here, as do the complex illusions Joan learns to peddle as a speakeasy performer. Unfortunately so much time is spent explaining the internal logic of the magic systems that much of the plot’s forward momentum is lost in these technical details.

One of the main tenets of prohibition, in retrospect at least, is the fact that much of the movement was grounded in false logic. For example, removing a man’s access to liquor would not make him less likely to hit his wife (the movement was very interested in stopping domestic violence). Instead it makes it more likely for him to hit his wife while sober.

What happens, then, if the idea of prohibition is actually grounded in fact? Kelly spends a lot of time telling readers that magical shine is as dangerous as everyone fears–something shown repeatedly in the story as peripheral characters suffer through addiction and withdrawal. While this concept is interesting it is never fully explained or explored in the narrative never doing anything new or fully addressing the inherent tensions of the time period.

A Criminal Magic is a heady blend of historical fiction and fantasy whose main characters have obvious chemistry albeit in an often under-utilized setting.