“It doesn’t devalue what you had with them, the stuff you experienced, the time you spent with them. That’s still valid, even if it wasn’t built to last. It’s not any less significant.” 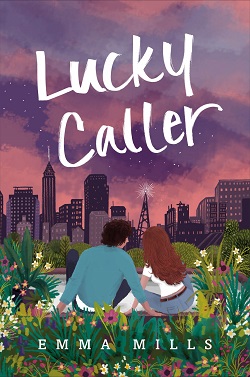 Nina is fine coasting through high school. After all, it’s called the path of least resistance for a reason. Taking radio broadcasting as her elective is one more way to have an easy senior year.

Nina’s radio team is not at all who she would have chosen. There’s Joydeep–who is happy to steer their radio show toward the easiest theme possible and steps up to host despite his obvious lack of comfort behind the mic–and Sasha–a girl who has never slacked on anything and doesn’t know what to make of this group of misfits. Then there’s Jamie, the childhood friend Nina has been actively trying to avoid since middle school.

Turns out, no one on the team knows what they’re doing with the radio show. Nina’s home life is on the verge of a big change as her mom gets ready to remarry. And Jamie, confusingly, might want to talk to her again. Then just when Sounds of the Nineties seems to be hitting its stride as a show, internet rumors and rogue fandoms threaten to ruin their fragile success.

When it starts to feel like nothing is made to last, Nina will have to decide if some things are actually worth working for in Lucky Caller (2020) by Emma Mills.

Mills’ latest standalone contemporary is set in the same world as her previous novels and once again taps into themes of fandom and belonging to great effect.

Nina is a self-proclaimed passive participant in her own life. She doesn’t like to think too deeply about anything and she avoids conflict. Both of which led to her years-long avoidance of her best friend Jamie despite his living in the same apartment building.

While the plot of Lucky Caller centers Nina’s radio show and her family dynamics as she adjusts to the idea of her mom remarrying, Nina’s willful ignorance about her father’s short-comings as a long distance parent and her own potential for change add a secondary layer to this otherwise straightforward story. As Nina works through these self-delusions she, along with readers, begins to get a clearer picture of her own life compared to the performative persona Nina presents in public to make things easier.

Despite the lack of self-awareness, Nina is incredibly pragmatic and acknowledges that a lot of life is transient and changing. She knows relationships, like so many other things don’t always last, but she also learns that a set expiration date doesn’t make a friendship or any other relationship any less valuable.

Lucky Caller is a thoughtful, sentimental, laugh out loud funny story with one of my favorite plot twists of all time in the final act. Highly recommended.

Possible Pairings: What Happened to Goodbye by Sarah Dessen, The Way You Make Me Feel by Maurene Goo, Four Days of You and Me by Miranda Kenneally, Tweet Cute by Emma Lord, Nice Try, Jane Sinner by Lianne Oelke, The Field Guide to the North American Teenager by Ben Philippe, Past Perfect by Leila Sales, How to Say Goodbye in Robot by Natalie Standiford, Laura Dean Keeps Breaking Up With Me by Mariko Tamaki and Rosemary Valero-O’Connell, Listen to Your Heart by Kasie West, Rayne and Delilah’s Midnite Matinee by Jeff Zentner