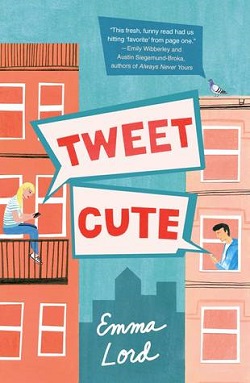 The only place where Pepper can admit how little she knows about what she wants next is when she’s talking to Wolf on Weazle–the anonymous chat app that is completely against school rules and impossible to ignore.

Unlike Pepper, Jack doesn’t worry about overachieving at all–his identical twin Ethan has that covered. Especially when Jack is always ready behind the scenes to take over the things Ethan can’t quite manage. Being the lower profile brother has its perks as it gives Jack time to teach himself to create and manage Weazle.

Talking to Sparrow anonymously on his app is the one place where no one is disappointed that Jack isn’t Ethan. It’s also a distraction from working at his family’s shop Girl Cheesing and worrying about the pressure he feels to one day take over the family business.

When Big League Burger steals the recipe for Girl Cheesing’s iconic grilled cheese sandwich, Jack is ready to throw down one Tweet at a time. And Pepper, it turns out, can give as good as she gets when it comes to snark.

All’s fair in love and fast food, but when Pepper and Jack’s Twitter battle escalates to viral proportions they will have to figure out if either of them can transcend their family’s expectations–not to mention their epic rivalry–to give their fledgling friendship a chance to become something more in Tweet Cute (2020) by Emma Lord.

Tweet Cute is Lord’s debut novel. The story alternates between Pepper and Jack’s first person narrations. If the premise sounds a little like You’ve Got Mail or The Shop Around the Corner, that’s not just you. The book stays close to the plot of those classics with a few modern twists (and a lot more grilled cheese).

Viral Twitter feud aside, Tweet Cute is a gentle contemporary romance about two characters trying to do the best they can even when they are actively getting in their own way partly due to their own preconceived notions and a lack of communication with friends and family.

Surprising plot twists, satisfying character arcs, and the inventive incorporation of rom-com tropes keep this story from ever feeling stale or predictable.

Tweet Cute is an unexpectedly delightful story of mistaken identity, social media feuds, baking, and fast food. All wrapped up in character arcs centered on forgiveness and learning to understand yourself while you’re still figuring out who that is. In other words: ALL OF MY FAVORITE THINGS. Highly recommended.

Possible Pairings: Alex, Approximately by Jenn Bennett; Suffer Love by Ashley Herring Blake; Tell Me Three Things by Julie Buxbaum; Verona Comics by Jennifer Dugan; Comics Will Break Your Heart by Faith Erin Hicks; Of Curses and Kisses by Sandhya Menon; Analee in Real Life by Janelle Milanes; Lucky Caller by Emma Mills; Tonight the Streets Are Ours by Leila Sales; Six Impossible Things by Fiona Wood; The Shop Around the Corner; You’ve Got Mail