“We all have to live with our choices.” 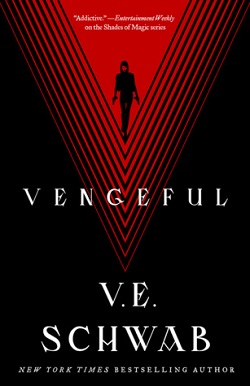 Five years ago Victor Vale completed the master stroke of his plan to take down his former best friend turned rival, Eli Ever. But the thing about an enemy who is, for all intents and purposes, immortal is that they’re hard to kill. Sometimes they’re even hard to keep contained–especially when they have nothing but time.

Victor has bigger concerns now as he tries to control a power he no longer understands  thanks to his resurrection. What was once black and white has become dangerously grey as Victor is forced to decide how far he is willing to go to save himself and protect the unlikely people who refuse to let him go.

Sydney thought she had found a new family with Victor and Mitch–or at least better friends and certainly better protectors. But five years is a long time to be protected; to be treated like a child. Especially now that Sydney is old enough to see cracks forming as the life she made for herself starts to fall apart.

Power is always a dangerous thing. But ExtraOrdinary powers are an entirely different kind of dangerous–something that Victor, Eli, and the entire city of Merit finds out when Marcella Riggins arrives. Revenge was never going to be enough for Marcella but as she tries to take power from the men who have only seen her as a pretty face, Marcella’s quest for power might bring the entire city to ruin around her in Vengeful (2018) by V. E. Schwab.

Vengeful is set five years after Schwab’s earlier novel Vicious. Although both can function as standalone novels, it’s best to start the series at the beginning.

Vengeful uses the same braided narrative structure moving characters toward an inevitable final confrontation while also using flashbacks to explore what brought each character to this point. While readers will be happy to see familiar characters including Victor, Mitch, and Sydney, Schwab also introduces a new group of EOs here who are equally compelling.

Where Vicious provided a sharp contrast between what can make a hero and a villain, Vengeful walks the line between the two and blurs it as both Victor and Eli are pushed into making choices–and alliances–they never would have previously considered. Themes of second chances and found family are also explored especially well as Victor and Sydney’s relationship changes and evolves with Sydney working to exert herself as an equal as well as a friend.

Vengeful is the sequel fans expect but also the continuation readers deserve filled with both familiar characters and unexpected turns hinting at what might come next.

Possible Pairings: Plain Kate by Erin Bow, If I Stay by Gayle Forman, Soon I Will Be Invincible by Austin Grossman, Magisterium by Jeff Hirsch, The Brokenhearted by Amelia Kahaney, Proxy by Alex London, Fracture by Megan Miranda, Watchmen by Alan Moore, Birthmarked by Caragh M. O’Brien, The Superhero Handbook by Michael Powell, If We Were Villains by M. L. Rio, Steelheart by Brandon Sanderson, Hold Me Like a Breath by Tiffany Schmidt, This Savage Song by Victoria Schwab, Never Never by Brianna Shrum, The Refrigerator Monologues by Catherynne M. Valente, The 5th Wave by Rick Yancey