“They had been drawn into the affairs of the great and could not easily escape.” 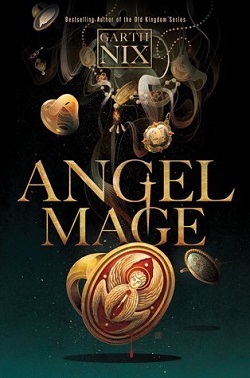 Liliath has spent more than a century hiding, asleep, hoping to regroup after the Fall of Ystara before she tries to reunite with her lover, Ystara’s archangel Palleniel. Rallying Ystara’s descendants around her, Liliath prepares to use her formidable angelic magic to be with Palleniel at long last.

But she will need more than Ystarans who have long been shunned by the angels–unable to benefit from even the most basic angelic magic without fear of being killed by the Ash Blood plague or transformed into beastlings–to complete her plan.

In nearby Sarance, four young people are the last pieces she needs: Simeon’s dreams of becoming a doctor are sidetracked when a scientific procedure goes horribly wrong; Henri, an opportunist to his core, thinks his luck may have changed when he receives a new position; Agnez has earned her way into the musketeers as a cadet; and Dorotea’s hopes to be left alone to study icon-making and angelic magic are dashed when her singular skill draws unwanted attention.

The four are immediately drawn to each other even as happenstance and greater forces conspire to bring them together. Although they start as Liliath’s pawns, these four unlikely friends may also be the only ones who can stop her in Angel Mage (2019) by Garth Nix.

Despite the magical additions, Angel Mage is uncannily timely as the characters explore themes of tolerance and discrimination in a world with a refugee crisis of its own. Inventive magic and an inclusive society give this story a setting with refreshingly modern sensibilities. This story is also notably free of all but the barest hints of romance. Instead, the growing friendship and trust between Simeon, Henri, Agnez, and Dorotea takes center stage as the four friends work together to understand the conspiracy into which they have been drawn and how best to use their distinct skills to try to stop it.

Angel Mage is an homage to friendship, magic, and The Three Musketeers–elements which blend surprisingly well in this fast-paced adventure. While Simeon, Henri, Agnez, and Dorotea’s journey reaches a logical and earned conclusion, fans can only hope Nix will return to this world again one day.