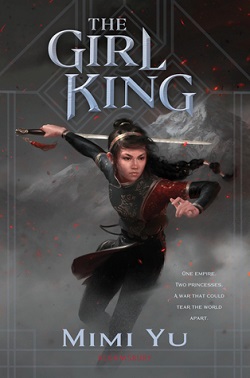 Lu has always known she will become her father’s successor, the first female ruler in the Empire of the First Flame’s long history. She has trained for this role for her entire life. But just as she is poised to take her rightful place, her father names Set, a male cousin, as heir instead disgracing Lu and trapping her in a betrothal she never wanted.

Furious and determined to claim her rightful place as heir, Lu’s search for allies leads her to Nokhai–the only survivor of a clan of shapeshifters who may need Lu’s help to understand his shifter abilities.

Min is timid and quiet. She always thought she’d live a quiet life in her sister Lu’s shadow. But when Lu leaves to find allies for her cause, Min discovers a dangerous power of her own–one that could make Set the proper heir or give Min her own chance to claim the throne in The Girl King (2019) by Mimi Yu.

The Girl King is Yu’s debut novel and the start of a series.

Yu creates a nuanced but dense world. Unfortunately the court intrigue and unique magic system only serve to highlight weak characterization for both Lu and Min who often come across as one note and unlikable despite their ambitions. Problematic racial dynamics within the world adds an uncomfortable layer to this story already populated by calculating and unexciting characters.

The Girl King is an interesting but not always ideally executed fantasy. Recommended for readers seeking a fantasy story with complex sister dynamics.

Possible Pairings: The Wrath and the Dawn by Renee Ahdieh, Shadow and Bone by Leigh Bardugo, Three Dark Crowns by Kendare Blake, Seraphina by Rachel Hartman, Descendant of the Crane by Joan He, Furyborn by Claire Legrand, Before She Ignites by Jodi Meadows, Falling Kingdoms by Morgan Rhodes, The Queen’s Rising by Rebecca Ross