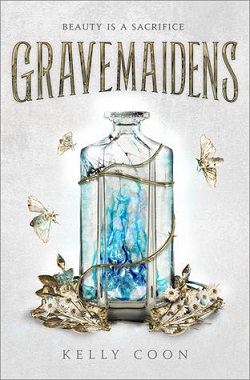 Kammani dreams of becoming an accomplished healer–the position her father held before he failed to heal the lugal’s son and his family was cast down from the privileged class as punishment.

While her father drowns the shame of his disgrace and grief over his wife’s recent death with drink, Kammani manages the day to day work of treating patients. Her hopes of securing a better life for herself and her sister Nanaea are shattered when Nanaea is chosen for the dubious honor of becoming one of three sacred maidens who will accompany the ailing lugal into death.

While her sister only sees the opportunity to live briefly in luxury, Kammani knows becoming a sacred maiden is a death sentence. Determined to save her sister at any cost, Kammani embarks on a dangerous mission to sneak into the palace and try to heal the lugal before it’s too late in Gravemaidens (2019) by Kelly Coon.

Gravemaidens is Coon’s debut novel. It is the first book in a fantasy duology set in a non-western world with piecemeal nods to ancient Sumer, Rome, and possibly Egypt with human sacrifice and a powerful god known as the Boatman.

Clunky prose and world building that falls short in terms of explanations about the ritual of the sacred maidens or other cultural norms drag down this otherwise interesting premise. Anachronistic phrases and over-the-top similes further detract from the novel’s potential. Kammani’s first person narration is filled with strangely sexualized descriptions of other female characters, including her own younger sister, with numerous mentions of full and shiny hair, straight teeth, and “womanly curves.” Throughout the novel this sexualization is equated with the preternatural beauty that distinguishes each sacred maiden.

Secondary characters who stay true to stereotype for most of the novel gain more depth near the end suggesting fans may find more to appreciate in book two.

Gravemaidens is a problematic but intriguing story. Make of that what you will.

Popular Pairings: The Wrath and the Dawn by Renee Ahdieh, Grace and Fury by Tracy Banghart, The Scorpion Rules by Erin Bow, The Good Luck Girls by Charlotte Nicole Davis, The Library of Fates by Aditi Khorana, The Grace Year by Kim Liggett, Girls of Paper and Fire by Natasha Ngan, Song of the Current by Sarah Tolcser