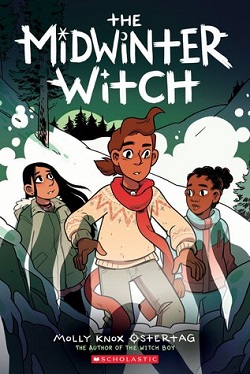 Aster looks forward to the Midwinter Festival every year. The festival is a yearly gathering of the entire Vanissen family and filled with competitions in the annual Jolrun tournament for both shapeshifting and witchery.

After earning his hard-won right to study witchery with the Vanissen girls, Aster is eager to compete and prove his skill as a witch.

But challenging generations of tradition isn’t easy. Especially when Aster’s new friend and fellow witch Ariel is still trying to prove to herself and the Vanissen family that she belongs. As competition between them grows and outside forces threaten the festival, Aster and Ariel will have to put aside their differences and remember the things that brought them together to stop dark magic from tearing them apart in The Midwinter Witch (2019) by Molly Knox Ostertag.

The Midwinter Witch is the conclusion of Ostertag’s Witch Boy trilogy which begins with The Witch Boy and The Hidden Witch.

The Midwinter Witch is the most character driven installment in this series as readers see more of Aster and Ariel working to come into their powers while Sedge joins Charlie at her human school.

High action competitions contrast well with in-depth conversations as both Aster and Ariel try to figure out how best to make space for themselves as witches in a family that often feels foreign to them. Ostertag’s full color illustrations are vibrant and bring this magical world to life.

The Midwinter Witch is a satisfying conclusion to a thoughtful and exciting graphic novel series. A must read for fans of previous installments.

Possible Pairings: The Graveyard Book by Neil Gaiman, Lobizona by Romina Garber, The Nameless City by Faith Erin Hicks, Frogkisser! by Garth Nix, The Tea Dragon Festival by Katie O’Neill, The Okay Witch by Emma Steinkellner, Nevermoor: The Trials of Morrigan Crow by Jessica Townsend, Mooncakes by Suzanne Walker and Wendy Xu, The Prince and the Dressmaker by Jen Wang