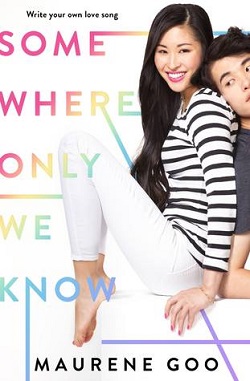 Lucky is the biggest K-pop star around and an unprecedented solo act. After wrapping up her solo tour in Hong Kong, Lucky is preparing to make her North American debut on The Tonight Show. After years of hard work, it finally feels like everything is coming together. And that would be everything Lucky could hope for if she wasn’t dying for a cheeseburger and also wondering when her music career stopped feeling like a dream come true and started feeling a lot like a trap.

Jack wants nothing more than to be a photographer–something he’s pretty sure his parents won’t understand when they could barely get on board with his plan to take a gap year between high school and college. To supplement his paltry income and prove he can make it as a photographer Jack freelances as a paparazzo capturing celebrities in compromising positions. It’s not savory work. But it is lucrative. Especially when Jack runs into a girl outside a hotel wearing slippers and hell-bent on finding a cheeseburger.

Lucky and Jack both have secrets and dreams they’re afraid to share. After one unforgettable day together in Hong Kong they’ll both have to decide if chasing what they really want is worth being honest with themselves–and each other in Somewhere Only We Know (2019) by Maurene Goo.

Goo’s latest standalone contemporary is a loose retelling of Roman Holiday with chapters that alternate between Lucky and Jack’s first person narration.

Lucky and Jack both start this story disillusioned, frustrated, and extremely jaded as they are forced to confront all of the limitations that have left them stagnant. Pushed out of their comfort zones for one day away from their typical lives, both teens start to wonder if things can be different while the secrets between them continue to mount.

Somewhere Only We Know is a very character-driven story with most of the focus on Lucky and Jack’s development throughout the novel than on their adventures. Both protagonists have to confront hard questions about identity and achievement as they consider how much they are willing to put on the line to get what they really want–not to mention figuring out if they have been their own biggest obstacles all along.

Somewhere Only We Know is an evocative, fast-paced romance perfect for fans of stories with humor, mayhem, and heart–not to mention vivid descriptions of Hong Kong’s sights, sounds, and foods.

Possible Pairings: Alex, Approximately by Jenn Bennett; Permanent Record by Mary H. K. Choi; Now That I’ve Found You by Kristina Forest; Just One Day by Gayle Forman; 29 Dates by Melissa de la Cruz; Her Royal Highness by Rachel Hawkins; American Royals by Katharine McGee; There’s Something About Sweetie by Sandhya Menon; This is What Happy Looks Like by Jennifer E. Smith; Virtually Yours by Sarvenaz Tash; Frankly in Love by David Yoon; The Sun is Also a Star by Nicola Yoon