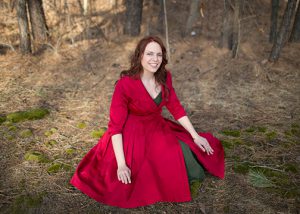 Isabel Bandeira is the author of the Ever After series. She’s here today to talk about the second book in the series, Dramatically Ever After, and her new heroine, Em. (Don’t worry, the books all read as standalones so no risk of spoilers for Bookishly Ever After here!)

Miss Print: Dramatically Ever After is the second book in your series. Can you tell me a bit about its inspiration? What was it like returning to a world and cast of characters you already knew while also writing a new story?

Isabel Bandeira: Em’s story was written immediately after I finished Bookishly Ever After. Her voice is incredibly dominant, so Em kept demanding her own story and wouldn’t leave me alone until I wrote it. If Bookishly hadn’t sold or if it had only been a one book deal, I was ready to switch Dramatically Ever After to a standalone and to query it separately. Em’s character and personality are so strong, she actually had a habit of taking over the other stories, and, when writing the other books in the series, I had to be very careful to let Em be a part of the story without trying to take over the leading role.

Coming back to Lambertfield and the world of PCHS was seamless because I was still in the Ever After world, but I had the fun job of flipping that world around to a new viewpoint. Every single one of us looks at the world and others with our own, unique perspectives colored by our personalities, backgrounds, and beliefs. How Em sees herself, for example, is different from Phoebe’s perception of her or Grace’s, or even the readers’. As writers, the line we have to walk, especially in the first person, is to portray that mental image of self while also showing in actions and others’ reactions a more neutral point of view. Em is a little bit of an unreliable narrator, so it was fun slipping in details readers could see that would, at times, contradict her perceptions. Companion novels or novels with multiple points of view are really nice ways for us, as writers, to learn to be more empathetic because we have to learn to see the same people and places through different lenses.

Miss Print: One of the things I loved about Dramatically Ever After is how different Em is from her best friend Phoebe. We’ve talked before about Phoebe having a lot in common with your teen self as she embraces her inner geek and her love of books (and knitting). What was it like getting inside a new character’s head for this story?

Isabel Bandeira: A lot of me went into Em’s character, too (that being said, I maintain that the character most like me in the series is Phoebe’s big sister, Trixie)! Like her, I’m a huge history dork, love speech writing, and was actually in a (similar concept but there are major structural differences) speech competition when I was a teen, representing my state on the national level and going around Washington, DC with over 50 other teens (all the states plus territories and regions for military families stationed overseas). But… I’m definitely not as outgoing as Em, as bubbly, or as quick to forgive. And she says all the things I don’t have the guts to say, which makes her so much fun to write.

And then there are the external pressures coming from her family. Even though only Em’s dad is an immigrant, compared to both of my parents, she still feels a lot of the things kids of immigrants, like me, feel. That quip about the Greek scholarship? Been there, done that, got badly mistreated by a Portuguese-American scholarship’s organizing committee. The pressure to go to college, be the best student, get the best scholarships, get a logical good-paying job… all of that got wrapped into Em and the worries that helped drive her motivations.

Voice is really important, and it’s more than words and actions. It’s in the details and things like mental comparators the character uses—while Phoebe’s descriptors revolved around things familiar to her in the forms of yarn, books, and archery: “It was soft, like a quivut and cashmere mix,” Em’s mental dialogue reflected her love of Hollywood and history: “She looked like a cross between Rita Hayworth and Katherine Hepburn” and using 17th-century stays as a descriptor for feeling constricted. It’s even conveyed in the use of color—Phoebe, for example, wears and mentions a lot of soft teals and blues and greys, while Em’s world is all about vibrant colors, especially yellow.

Miss Print: Dramatically Ever After takes Em away from her beloved home state to compete in a speech competition in Boston. How did you decide which locations to have Em visit during the competition?

Isabel Bandeira: I chose Boston because it’s such a great city and the perfect place to showcase Em’s love of history. As a history dork, I was easily able to pull on my own wonder and awe from my first visit there years ago to build on Em’s reactions to this world.

The grounds outside the colonial dinner site were modeled after one of my favorite historical sites—Phillipsburg Manor in Sleepy Hollow, NY. You really do feel like you’ve stepped back in time in that place, and I wanted Em to have that space as a backdrop to one of the conversations where she first begins revealing bits of her real, unfiltered self to Kris.

And the MFA: I had to write the MFA into DEA primarily because of the statue of Guanyin. Everyone has points in their lives when they feel hopeless or as if no one could ever understand what they’re going through. That was what I was feeling the first time I walked into that wing of the MFA and saw Guanyin’s statue. I remember looking up and coming to a complete stop the moment I saw that face projecting so much compassion and kindness, and I remember crying and taking comfort from this over two-thousand-year-old statue. Em needed a moment like that, too, and I made sure to work this amazing work of art into Em’s story.

Miss Print: Can you tell me anything about your next project? What can readers expect in Practically Ever After?

Isabel Bandeira: PEA was probably the hardest book of the three to write—how do you take a “perfect” couple, the couple all the other characters in the last two books look up to, and break them up? I love writing Grace and Leia together, and it was not easy to throw challenges their way. But every relationship hits bumps, even perfectly practical ones!

Readers can expect practicality, flawless use of planners and lists, science and engineering, dance, cheer, prom, and lots of the same friendship dynamics we’ve seen in the last two books. I really enjoyed diving into Grace’s discovery of her love of engineering, her rediscovery of her love of dance, that that bittersweet space in time of being on the edge of change. I hope readers enjoy it, too!

Thank you so much for reading Dramatically Ever After and for the interview!!! <3

Thanks again to Isabel for taking the time to answer my questions!

You can see more about Isabel and her books on her website.

You can also check out my review of Dramatically Ever After.