“Freedom has a way of destroying things.” 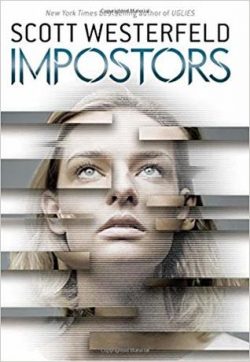 Frey and Rafi are inseparable. They are sisters. They are a secret.

Raised by her father in the shadows, hidden from everyone, Frey is Rafi’s double–a decoy who stands in whenever her twin sister has to appear in public where she is vulnerable to threats. While Rafi is raised to be charming and poised, Frey is raised to be an assassin, a weapon.

Sent in her sister’s place as collateral for one of her father’s deals, Frey tries her best to inhabit a vapid world that is completely alien to her. Frey has never had to pretend for this long and she knows that Col, the son of her captor, is starting to catch on.

As her assignment drags on and the stakes climb higher, Frey realizes that her place in her family and in the larger world is changing. After living for so long in the shadows, Frey will have to step into the public eye if she wants to save her sister and herself in Impostors (2018) by Scott Westerfeld.

Impostors is the first book in Westerfeld’s new series which is set in the world of his Uglies trilogy.

This series starts twenty-five years after Tally Youngblood changed the world forever but it’s been years since anyone has actually seen her. In the aftermath new leaders have stepped into the power vacuum creating their own mega cities and, in the case of Frey and Rafi’s father, their own dictatorships where advanced tech is used to police the population.

With no other frame of reference, Frey and Rafi can barely articulate the restrictions and horrors of their upbringing–something that becomes clearer to Frey only when she is left untethered with no way to return home to her sister.

Impostors is a high octane adventured filled with cool tech, calculating villains, and a ruthless protagonist prepared to do whatever it takes to protect the only person she’s ever cared about. Frey and Col’s reluctant alliance and evolving relationship remains compelling despite an initial lack of chemistry.

Although Impostors is stronger and faster, it falls short of being better than the original series instead often feeling like a story retold. Recommended for readers who like their science fiction filled with high speed chases and rich world building. Ideal for diehard fans of the series as well as those looking to enter the Ugliesverse for the first time.