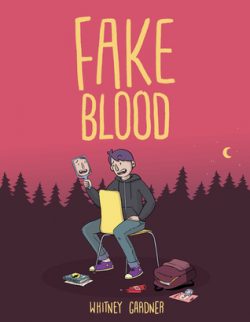 AJ didn’t grow over the summer. He didn’t have any exciting adventures. It feels like he’s starting seventh grade exactly the same while his best friends are charging full speed ahead.

AJ’s crush on Nia Winters is in the same place too–standing totally still. Nia is cool and interesting and obsessed with vampires so AJ is pretty sure she’d never like someone as vanilla as he is.

After they are paired for a project on Transylvania, AJ hatches the perfect plan to win Nia over: Pretend to be a vampire! Changing his hair and attitude to be more like a vampire gets Nia’s attention–but not the way he imagined when she reveals that she doesn’t like vampires. She slays them.

While AJ tries to convince his crush that she should hang out with him instead of staking him, both Nia and AJ realize that there are bigger threats lurking in Spoons Middle School in Fake Blood (2018) by Whitney Gardner.

Fake Blood is a delightful send up of some familiar vampire tropes including charming nods to Buffy and Twilight. Gardner’s full color artwork is vibrant with clear panels and distinct characters. AJ’s transformation from seventh grade boy to vampire is handled especially well with a lot of visual cues adding to the story.

Fake Blood is a funny and authentic story about embracing individuality and learning that doing things your own way is often the best way to get through life. And, of course, it’s also filled with tips for fighting vampires–whoever they may be. Recommended for readers who looking for something a little funnier and a little quirkier than your typical paranormal romance fare.