Votes for Women! American Suffragists and the Battle for the Ballot is a page-turning read about the womens suffrage movement in the United States. It’s well-researched, thorough, nuanced, and completely engrossing–in other words, everything I look for in nonfiction. Today I have Winifred here to share a bit more about this book and her process.

Miss Print (MP): Can you tell me a bit about your path as a writer? How did you get to this point?

Winifred Conkling (WC): I’ve always loved sitting at my desk, writing stories. I was the nerdy kid in third grade who typed up a 10-page report when the assignment was to write a three-paragraph paper. I loved seeing the words on the page and feeling satisfaction when an assignment was finished. I studied journalism in college, then worked at several newspapers and magazines. When I had children, I started writing adult nonfiction (and doing a lot of ghostwriting). I changed lanes again in 2009 when I went back to school to get an MFA from the Vermont College of Fine Arts in a program for Writing for Children and Young Adults. I now see myself as a children’s book author, although I can make no promises about what may come next.

MP: What was the inspiration for Votes for Women? What drew you to this subject?

WC: So often the inspiration for one book has a link to a previous project. In this case, my inspiration for Votes for Women! came from my 2016 book Radioactive! How Irène Curie and Lise Meitner Revolutionized Science and Changed the World. In my research for that book, I learned that women in France did not get the right to vote until 1945. Yes, 1945!! That got me to thinking about suffrage in the United States. I knew that the 19th Amendment gave women the right to vote in the United States in 1920, less than 100 years ago. Most people don’t know much about women’s suffrage – and they should, now more than ever.

MP: What kind of research did you do while writing this book? Was there any information you discovered but were unable to include in the book?

WC: I love researching a new book. For this project I visited Seneca Falls and got to sit inside the church where the first women’s rights conference was held in 1848. It was also great fun to track down the photographs of the movement – from the early images of Susan B. Anthony and Elizabeth Cady Stanton to the 20th century photos of the Silent Sentinels standing in front of the White House. There’s nothing like an old photograph to transport you to another place and time.

MP: What does a typical writing day look like for you?

WC: I’m really not a “typical day” kind of person. In fact, I’m quite the opposite. When I’m energized about a project and in the hard-core drafting phase, I’ll work for 10 or 12 hours a day. I even think about writing problems overnight, and sometimes I’ll wake up with a new idea or solution. During this more creative part of preparing a manuscript, I tend to neglect my daily responsibilities, although the dog always reminds me when it’s time for me to feed her. After I wrap up a draft, I say hello to my husband and children and catch up on the chores I’ve avoided. And then I start the cycle over again.

MP: What part of this story was the most difficult to write? Do you have a favorite section?

WC: That hardest part to write was a period in the late 19th century that historians aptly referred to as the “doldrums.” Frankly, not much happened in the suffrage movement. I spent a lot of energy trying to figure out how to make something boring more compelling. In the end, I summarized what happened and moved on to the more interesting bits.

I suppose the most fascinating part to write was the section about Alice Paul and suffragists who were jailed for standing in front of the White House holding protest banners. The conditions in the prisons were appalling, so the women began a hunger strike. In response, some of them were force fed by having feeding tubes shoved down their throats or into their nostrils. When Alice Paul continued to refuse food, she was taken to an insane asylum. It’s hard to believe that this happened in the United States of America just one hundred years ago.

MP: Can you tell me anything about your next project?

WC: I’m going to respectfully dodge the question. I’m in the early stages of a couple of projects. I find that when I’m working on a new idea, I don’t like talking about it too much. I can only discuss the parts that I’ve got down on paper. Otherwise, my excitement comes out in conversation rather than on the page.

WC: If an idea is interesting to you, it will be interesting to someone else. Dig in and follow your curiosity. Research, write, rewrite – then rewrite again. (That’s the unfortunate truth of the matter – writers spend a lot more time rewriting than writing.) There are so many fascinating stories that need to be told. Get busy!

Thanks again to Winifred for for taking the time to answer some of my questions.

You can see more about Winifred on her website.

You can also read my review of Votes for Women! here on the blog.

Votes for Women! American Suffragists and the Battle for the Ballot (2018) by Winifred Conkling is engaging narrative non-fiction at its best.

This book offers a nuanced history of the women’s suffrage movement in the United States from the Seneca Falls convention through to the momentous vote that ratified the nineteenth amendment with the moments leading up to the vote and its aftermath framing the book as prologue and epilogue.

Most of the book is follows Elizabeth Cady Stanton from her birth through to the moment that she realized women having the right to vote was key to equal rights and her subsequent dedication to the suffrage movement. Letters and ephemera highlight Stanton’s abiding friendship with Susan B. Anthony and other women within the suffrage and prohibition movements–two groups that often overlapped. They also underscore some of the inner conflicts that are not often covered in broad strokes about this moment in history.

The last few chapters of the book shift the focus to Alice Paul and Lucy Burns with their more militant approach to the fight for women’s suffrage including their numerous arrests, hunger strikes, forced feedings, and nonviolent protest.

Votes for Women! is frank in a way that many history books are not. Conkling covers some of the uglier moments of the suffrage movement thoughtfully, including the ways in which the suffrage movement divided when faced with choosing between votes for women or votes for African American men. No one within the movement was perfect and the fight for suffrage as a whole often disregarded women of color as well as the poor and working class–something that Conkling writes about thoughtfully and without apology.

The end of the book includes extensive end notes, timelines, resources, and more.

Be sure to check out my exclusive interview with Winifred about Votes for Women starting tomorrow! 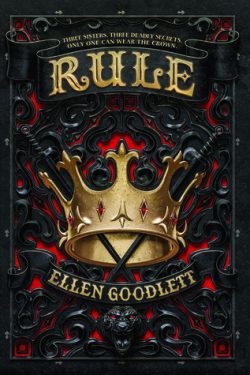 With the king dying, his heir murdered, and rebellion brewing in the east it might be only a matter of time before the kingdom of Kolonya and the outer Reaches descends into chaos.

Desperate for an heir, the king finds three unlikely options:

Zofi has lived her entire life with a band of Travelers in the Reaches. Her loyalty to her family is boundless. But only Zofi knows how far she has already gone to protect those she holds dear.

In the Eastern Reach Akeylah is desperate to get away from her abusive father. She’s even willing to perform dangerous and forbidden magic–completing a spell that will have far-reaching consequences for the entire kingdom.

Ren has grown up in Kolonya in the heart of the kingdom. Working as a lady’s maid she is biding her time until she can climb the social ladder out of the servants’ quarters forever. Her latest plot might do the trick, but only if she isn’t arrested for treason first.

Summoned by the king, all three girls are certain they will soon be facing arrest if not execution. Instead are faced with the shocking truth: as the king’s illegitimate daughters all fighting for the chance to become his next heir. The only problem is that someone in Kolonya knows their secrets and is prepared to reveal them all to keep the girls from taking their rightful place in Rule (2018) by Ellen Goodlett.

Rule is Goodlett’s debut novel and the start of a new series. The book follows all three sisters in alternating close third person chapters.

If this book sounds a lot like Three Dark Crowns, that’s because it is. The book starts with a very similar premise but instead of focusing on the sisters’ in-fighting to get the crown these heirs have the additional problem of a blackmailer.

My main problem with this story is that it made no sense to me that the king has not one but three illegitimate heirs that he has chosen to keep away from the palace while still keeping tabs on them. Every problem the sisters have, every misdeed they knowingly or unknowingly committed, stems from being unaware of their parentage which feels extremely convenient as a plot point upon which an entire series hinges.

Zofi, Akeylah, and Ren are interesting heroines in a world that remains surprisingly under-developed considering its fraught politics. They have different reasons to want (and dread) rising to the throne and unique perspectives about their changed circumstances. Subterfuge, scheming, and unsuitable love interests abound as each sister tries to keep her secrets while gaining the upper hand in their journey to the crown.

Rule is a scandalous page-turner ideal for readers who enjoy fantasy and suspense in equal measure.

This week on the blog you can check out:

This was a pretty good week. I got to attend the Tenth Anniversary Celebration for the Goodreads Choice Awards. It was overwhelming but super cool. You can hear more about it and see my swag bag over on Instagram.

Halloween was super chill and I was really happy with my DisneyBound style Minnie Mouse costume.

I also finished Devils Unto Dust by Emma Berquist on audio. And it was so good! I need you all to read it immediately so we can talk about it. (And if you are an audiobook reader, check this one out. It’s fantastic.)

And I finally started to take pics with the raven snowglobe my mom bought me for Halloween which I’m really excited to show off. Here’s my first pic with my planned reading for the month:

I’m still kind of overwhelmed–especially by money stuff. My first step is that I’m using my paper planner again and writing everything thing down. After that I hope I’ll have more data to work with to try and budget or something. I also get to call my credit cards and ask if they can do anything at all for me which I’m sure will be as fun as it sounds!

How was your week? What are you reading?