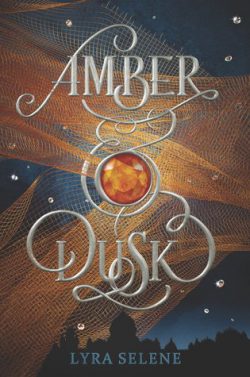 Sylvie has always known that she was destined for greater things. She is certain that her life as an orphan with the Sisters of Scion is only a small blip on her path to greatness. When she comes into her legacy–a magical talent that is believe to only belong to the upper class–Sylvie knows it’s a sign.

Sneaking onto a caravan Sylvie makes her way from the very edges of the Dusklands when the darkness of the Dominion constantly looms into the Amber City’s palais Coeur d’Or at the heart of the Amber Empire. In this city where the sun never sets, Sylvie assumes that her magic to create illusions will be enough to earn her a place in the Empress’ court.

Instead Sylvie finds herself the center of a wager, the butt of a cruel joke, among the palais courtiers. Sponsored by an enigmatic noble called Sunder Sylvie must learn to control her legacy as she navigates the dangerous games within the palais. Under her new name, Mirage, she will have to fight to earn her place at the palais while deciding how much she is willing to lose in Amber & Dusk (2018) by Lyra Selene.

Luxuriant descriptions underscore the complex world Selene has created where the sun never leaves the sky and the moon never rises. Complex magic and class systems add layers to this story, particularly once Sylvie arrives at a court reminiscent of Versailles.

Sylvie is unapologetic about her ambitions and shrewdly pursues her imagined destiny despite numerous obstacles and warnings from other characters that the palais is not the paradise she might imagine. Reckless and sometimes ruthless, Sylvie throws herself into her new life as Mirage without fully considering the risks or consequences of her choices.

While Sylvie/Mirage is a compelling if sometimes frustrating heroine, the rest of the cast is often one-dimensional by comparison. Mirage’s sponsor Sunder–so named for his legacy’s ability to cause pain–is as mysterious as he is problematic.

Amber & Dusk is a seductive fantasy filled with magic and machinations in equal measure complete with an ending that will leave fans clamoring for a sequel.

Possible Pairings: Red Queen by Victoria Aveyard, The Scorpion Rules by Erin Bow, The Star-Touched Queen by Roshani Chokshi, The Belles by Dhonielle Clayton, Stain by A. G. Howard, The Diabolic by S. J. Kincaid, The Kiss of Deception by Mary E. Pearson, Ash Princess by Laura Sebastian, Scythe by Neal Shusterman, Enchantée by Gita Trelease, The Boneless Mercies by April Genevieve Tucholke, And I Darken by Kiersten White