“Didn’t I tell you earlier? You don’t have to trust someone to make a deal with them. You only have to have something you know they want.” 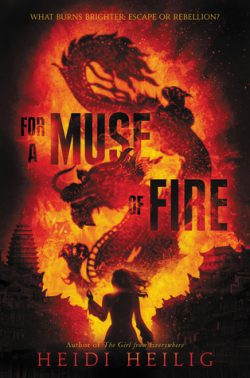 With luck and determination, Jetta hopes that she and her parents can parlay their fame as shadow players in Chakrana into passage to Aquitan where shadow plays are in high demand.

There are rumors that the Mad King values nothing so much as shadow plays and Jetta hopes that garnering the king’s favor could also give her access to the spring that has cured the king’s madness–something Jetta desperately wants for her own malheur.

But notoriety of any kind is dangerous with so many secrets behind the scrim.

Jetta’s puppets move without string or stick. Instead she uses her blood to bind recently deceased souls into her puppets–one of the old ways that is now forbidden in the wake of La Victoire and the imprisonment of Le Trépas at the hands of the colonial army from Aquitan.

With danger lurking everywhere Jetta will have to confront uncomfortable truths and terrible choices as she considers how much she and her family have already sacrificed to get to Aquitan and how much more they still have to lose in For a Muse of Fire (2018) by Heidi Heilig.

For a Muse of Fire is the start of Heilig’s new trilogy. An author’s note explains that Jetta’s malheur is bipolar disorder–a mental illness she shares with Heilig.

This series starter is fast-paced and high-action while also offering readers a thoughtful commentary on the long lasting ramifications of war and colonization. Chakrana and Aquitan are inspired by Asian cultures as well as French colonialism which comes through in cultural touchstones including food, dress, and language.

Jetta’s first person narration is broken up with various ephemera including telegraph transcripts, flyers, songs, and play scenes featuring other characters. This technique works well to flesh out the novel by offering a wider view of the story and allowing other characters to take over the narrative action whenever Jetta’s focus becomes more internal as she tries to negotiate both a dangerous world and her own malheur.

For a Muse of Fire is as engrossing as it is violent. Heilig’s world building is richly imagined and carefully layered with nothing quite as it seems. Jetta’s malheur colors not only her perceptions throughout the story but many of her actions with reckless decisions during episodes of mania and listless lows with clarity and introspection often coming too late.

For a Muse of Fire is a dramatic story with an inclusive cast, high stakes, and an intense cliffhanger that will leave readers clamoring for the next installment. Recommended.

Possible Pairings: Children of Blood and Bone by Tomi Adeyemi, Shadow and Bone by Leigh Bardugo, The Brilliant Death by Amy Rose Capetta, The Gilded Wolves by Roshani Chokshi, The Bone Witch by Rin Chupeco, Forest of a Thousand Lanterns by Julie C. Dao, Mirage by Somaiya Daud, The Lie Tree by Frances Hardinge, Raybearer by Jordan Ifueko, Forest of Souls by Lori M. Lee, Black Wings Beating by Alex London, Nocturna by Maya Motayne, Clariel by Garth Nix, The Midnight Lie by Marie Rutkoski, The Tiger at Midnight by Swati Teerdhala, An Ember in the Ashes by Sabaa Tahir, Enchantée by Gita Trelease