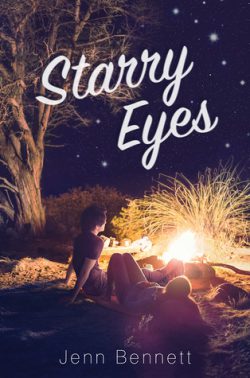 Zorie and Lennon used to be best friends. But that was before the homecoming dance last year and well before their families started feuding around the time that Lennon’s moms opened a sex toy shop right next to the massage shop that Zorie’s parents run.

Seeing Lennon and remembering how close they used to be still stings, but they’ve gotten good at avoiding each other. At least, Zorie thought they had until her mom adds a surprise adventure to Zorie’s carefully scheduled summer. (Even though she knows that being spontaneous gives Zorie hives. Literally.)

What starts as a luxe week-long glamping trip to cheer up a friend (and maybe hook up with her longtime crush) turns into a nightmare when Zories realizes that Lennon is rounding out the group. Then things go really wrong and Zorie and Lennon are stranded in the wilderness. Alone.

Needing each other to survive without any distractions might be just what Zorie and Lennon need to reconnect as they try to get back to civilization. But even after working through old hurts and secrets, they’ll have to see if their renewed friendship is ready for the real world in Starry Eyes (2018) by Jenn Bennett.

Bennett’s latest standalone contemporary romance is an absolute delight and has made me an instant fan. I also love the way this book is designed. The book is broken into three parts, each accompanied by a sketch by Bennett (who has a fine arts degree) of Zorie and Lennon’s camping gear. Lennon is an amateur mapmaker and Bennett also created maps to accompany the story which really help bring their down and the trails they travel to life.

Starry Eyes has a refreshingly varied cast and also highlights two of the many alternatives to a “traditional” nuclear family. Lennon lives with his moms but is also close with his Egyptian-American father–something that becomes more important as the plot progresses. Meanwhile Zorie’s mother died when she was eight and since then Joy, her Korean-American stepmother, has been more of a parent than her father leading to divided loyalties as Zorie uncovers a secret that could  tear her parents’ marriage apart.

Zorie is a type A nerd who plans and micromanages her own life to fend off her anxiety while also pursuing her passion for astronomy. She’s a fun and honest narrator who takes being pushed way out of her comfort zone (mostly) in stride. Laid back Lennon is the perfect foil to Zorie. His interests lie in horror, snakes, maps, and (luckily for Zorie) hiking and camping–two things that just might get them back home in one piece. While the hurt on both sides is obvious as they try to piece together what went wrong, their chemistry crackles throughout the novel.

Starry Eyes is a rich and entertaining romance. Come for the witty banter and tension, stay for the evocative descriptions, clever plotting, and nuanced characters. Highly recommended.

Possible Pairings: Happily Ever Afters by Elise Bryant, What to Say Next by Julie Buxbaum, Little & Lion by Brandy Colbert, Words in Deep Blue by Cath Crowley, Saint Anything by Sarah Dessen, Unclaimed Baggage by Jen Doll, Verona Comics by Jennifer Dugan, The Last Time We Were Us by Leah Konen, Lola and the Boy Next Door by Stephanie Perkins, Today Tonight Tomorrow by Rachel Lynn Solomon, The Insomniacs by Marit Weisenberg