“Loving someone was traumatizing. You never knew what would happen to them out there in the world. Everything precious was also vulnerable.” 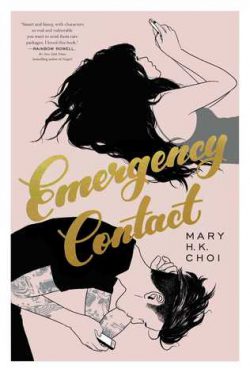 Penny Lee is a college freshman at the University of Texas in Austin. She’s eager to get away from the drama that always seems to surround her mom who is, sadly, super hot and super clueless about the attention she attracts from sketchy guys. High school was fine but Penny knows that college is going to be her real chance to shine as she starts taking English classes and pursues her longtime dream to become a published author.

Sam Becker dropped out of college when he couldn’t afford it. He’s twenty-one and manages a coffee shop where he is in charge of all the baking and has a room upstairs. He’s taking an online course to get back on track with his goal of becoming a documentary filmmaker and dreading the arrival of his “niece” Jude who is about to start her freshman year of college. Sam’s still trying to piece his life together post-breakup but he’s getting there. At least until his Instagram famous ex (aka Liar) drops a bombshell.

When Sam has a panic attack in the middle of the street it’s Penny–Jude’s new roommate–who finds him and talks him down. She’s the one who wants him to text her when he gets home and, maybe most importantly, she’s the one that suggests they could be each other’s emergency contact.

As they start texting all the time, Penny and Sam realize they might have more in common than they thought. Their friendship helps both of them step outside of their comfort zones. But neither of them is sure if they’ll ever be ready to take the biggest leap by bringing their virtual relationship offline and into the real world in Emergency Contact (2018) by Mary H. K. Choi.

Emergency Contact is Choi’s debut novel. It has received two starred reviews as well as a glowing write up in the New York Times. The story alternates between chapters written in close third person following Penny and Sam along with the expected sections of text messages and emails.

Penny and Sam are authentic, flawed protagonists. I’ve started calling them lovable train wrecks when I talk about this book. They don’t have all the answers. They may not have any of the answers (a realization that is almost as enlightening for Penny in terms of her relationship with her mother as, you know, actual enlightenment). But they both persevere, strive, and ultimately learn how to go after what they want–things they only accomplish thanks to confidence gained through their friendship.

I say friendship because while a lot of this story plays out against the backdrop of whether or not Penny and Sam will get together, the real meat of this novel are the friendships that both Penny and Sam build (with each other and with other people) as they try to survive this crazy thing called life. You can cut the romantic tension in this story with a knife, but first Choi carefully builds up Penny and Sam’s friendship. Both of them have to grow a lot and learn to care about themselves before they can start to care about someone else—character arcs which Choi expertly portrays throughout the novel.

Before meeting Sam, Penny is used to having a running internal dialog of all the things she wants to say–especially to people who try to belittle her or think their microaggressions and other racist remarks about Penny’s Korean heritage aren’t a big deal. Thanks to the freedom of being away from home for the first time and also having someone who genuinely supports her, Penny is finally able to speak up. She can tell her roommate Jude’s best friend that her racist remarks aren’t okay. She can admit what her French tutor did–what she never even told her Mom. And she can also learn how to move past those things instead of stewing in self-doubt and regret.

Sam, meanwhile, has been stagnating for quite some time. His life is a disaster and he’s used to it–especially when his ex-girlfriend announces that she is pregnant triggering Sam’s first panic attack. With Penny’s support and the knowledge that she cares, Sam realizes the first step in making better life choices isn’t waiting for things to change. Instead, it’s time for Sam to accept that his parents are incapable of being there for him—and haven’t been for some time. It’s time to take action to change things by pursuing his passions and standing up to his ex-girlfriend instead of letting her steamroll him yet again.

Emergency Contact is authentic and sardonic as it follows these two unlikely friends who fear connection almost as much as they crave it. This tension is the driving force for both the characters and the plot. Choi expertly uses close third person perspective and language to amplify that tension and to explore its limits as Penny and Sam try to figure out how to relate to each other even while, internally, they feel hopelessly inadequate by comparison.

(During one of their first “in real life” encounters Penny bemoans her casual outfit and generally messy appearance while being completely fascinated–and attracted–by Sam’s glasses. Sam, meanwhile, is completely self-conscious about his glasses and trying to avoid openly ogling Penny. A push and pull that repeats throughout the novel and perfectly captures the dynamic between these two characters.)

Possible Pairings: The Beauty of the Moment by Tanaz Bhatena, Tell Me Three Things by Julie Buxbaum, Love and Other Perishable Items by Laura Buzo, Teach Me to Forget by Erica M. Chapman, Finding Mr. Brightside by Jay Clark, Required Reading for the Disenfranchised Freshman by Kristen R. Lee, A Very Large Expanse of Sea by Tahereh Mafi, When Dimple Met Rishi by Sandhya Menon, Analee in Real Life by Janelle Milanes, Nice Try, Jane Sinner by Lianne Oelke, Fangirl by Rainbow Rowell