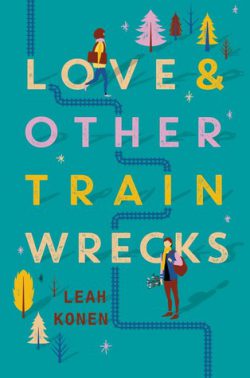 Ammy doesn’t believe in true love. But she’s still riding a train from Virginia to upstate New York to attend her dad’s second wedding. She isn’t sure if her mom will ever forgive her. But she also knows it’s too late to turn back.

Noah is a total romantic. So much so that he’s taking a train back home to try and win back his first love—the girl he broke up with before he left for college.

Ammy and Noah are both desperate to get to their destination–even if it means they’re stuck traveling together after their train breaks down in a snow storm.

When a quick detour turns into an all-day trip it seems like Ammy and Noah might be falling for each other. But at the end of the journey an unexpected surprise changes everything and leaves both Ammy and Noah wondering if love and their train wreck relationship can be salvaged in Love and Other Train Wrecks (2018) by Leah Konen.

Love and Other Train Wrecks is a standalone novel. This contemporary romance plays out over the course of twenty-four hours during their madcap journey to upstate New York.

I’ll be honest, I’m not a fan of books where a main character is forced to choose between their parents because of divorce. Ammy, unfortunately, has no good choices and spends a lot of the novel wondering if going to her father’s wedding is worth the effort when she isn’t sure if her father even wants her there or it her mom will ever forgive her. But Konen’s characterization and plotting more than makes up for starting the novel with this premise. Ammy and Noah are fun and sympathetic whether you’re a romantic or not.

Love and Other Train Wrecks is a fast-paced contemporary novel filled with humor and romance. Readers will immediately be swept up in Ammy and Noah’s journey–bumps and all.

Possible Pairings: The Best Night of Your (Pathetic) Life by Tara Altebrando, Dash and Lily’s Book of Dares by Rachel Cohn and David Levithan, Once and For All by Sarah Desseh, Save the Date by Morgan Matson, Tonight the Streets Are Ours by Leila Sales, The Statistical Probability of Love at First Sight by Jennifer E. Smith, The Sun is Also a Star by Nicola Yoon