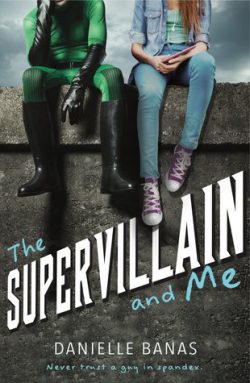 No one knows why some people develop super powers and others don’t. The only certainty is that supers fight crime provided much needed aid in a world riddled with violence and danger.

Abby Hamilton knows that supers are the only reason it’s even remotely save in Morriston. She just wishes that the town’s hottest superhero, Red Comet, wasn’t also her incredibly annoying older brother Connor.

Abby made peace with being normal a long time ago. She doesn’t mind. Especially when her real passion is musical theater, anyway. Still, it would sometimes be nice to take center stage in her own family instead of always being overshadowed by Connor’s heroic feats and her father’s job as mayor.

When Morriston’s newest super save Abby from a mugging, she has no idea that he’s Iron Phantom–a dangerous new supervillain. Except according to Iron Phantom himself, he isn’t actually evil. And he isn’t the biggest threat to the city by a long shot in The Supervillain and Me (2018) by Danielle Banas.

The Supervillain and Me is Banas’ debut novel. Although it is a series starter, the story also functions as a standalone.

The Supervillain and Me starts with an incredibly fun premise. Who doesn’t want to read about a world filled with superheroes and a misunderstood supervillain? Unfortunately, the premise is a bit misleading as Abby’s first person narration focuses more on traditional high school antics like auditioning for the school musical than the superhero shenanigans I had hoped for.

The world building is also flat offering little explanation for where Morriston is situated in the world or how supers function aside from local heroes Red Comet and Fish Boy. It’s no exaggeration to say that readers learn more about Abby’s school musical than they do about anything else in this world.

Abby is a smart-talking narrator complete with one note jokes and wise cracks that sometimes read as a bit too sharp. It’s hard to talk about the other characters in the book, or even more of the plot, without also sharing spoilers. The supporting cast includes a lot of fun characters. Unfortunately most of those characters are male. Every active super that readers encounter and, in fact, almost every character aside from Abby and her best friend Sarah, are male. Since superheroes are already often seen as the domain of boys and men, that was especially frustrating.

The Supervillain and Me is a fast-paced read filled with action, witty banter, and some light romance–ideal for readers looking for humor, excitement, and a superhero story told in broad strokes.

Possible Pairings: Not Your Sidekick by C. B. Lee, Renegades by Marissa Meyer, Steelheart by Brandon Sanderson, Zeroes by Scott Westerfeld, Margo Lanagan and Deborah Biancotti, The Refrigerator Monologues by Catherynne M. Valente, Queens of Geek by Jen Wilde