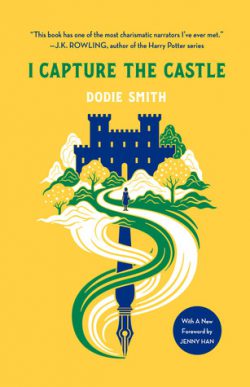 Seventeen-year-old Cassandra Mortmain and her family have lived in the castle for years. It had been different when her father was still writing and her mother was alive. There had been plans to fix up the castle then.

Everything is different now. Mortmain stopped writing after his time in prison and his second wife, Topaz, is at her wit’s end for ideas to get him to start again. Her work as an artist’s model is far from enough to support the entire family. Even with money from their sometimes servant and friend Stephen, there is no denying that the family’s situation is dire.

Cassandra’s older sister is certain that she can change her family’s fate if only she can find the right sort of man to marry. But as the eccentric, poverty-stricken neighbors, it isn’t easy to attract the right sort of man at all. Thomas, the youngest, is still in school but his prospects are unlikely to help any.

Without any clear way to change their fortunes, Cassandra settles instead to chronicle the day-to-day happenings within the castle in a hope to capture the strange circumstances that have become quite ordinary to her.

Little does Cassandra know as she sets out to document life in the castle, her family is about to embark on a momentous year filled with delightful surprises, momentous changes, and maybe even first love in I Capture the Castle (1948) by Dodie Smith.

I Capture the Castle only came to my attention when I saw the newest edition from Wednesday Books with a forward from Jenny Han. In her forward Jenny talks about accidentally becoming a collector of first editions of this book and her decision to buy it from her college bookstore based on the strength of JK Rowling’s blurb. I similarly was drawn to this book on the strength of Jenny’s forward and can confirm that if you are a fan of her cozy contemporary novels, this is a perfect classic to pick up.

The novel is presented as Cassandra’s journal, written over the course of three notebooks and one turbulent year. Cassandra narrates events as she sets them down in her notebook with sly observations and wit. Her narrative voice is breezy and the dialogue included is snappy.

I won’t say too much about the plot except to share that it was surprisingly unpredictable and kept me guessing–things I didn’t expect from a classic. By the time I got to the third act of this book, I couldn’t read fast enough. I couldn’t wait to see what would happen next.

Vivid descriptions bring the eccentric castle and its residents to life drawing readers even further into this story. Although it was first published seventy years ago, I Capture the Castle is a timeless story. Cassandra’s struggles and triumphs feel as fresh and immediate as if they happened today.

Possible Pairings: Love, Lies, and Spies by Cindy Anstley, A Brief History of Montmaray by Michelle Cooper, To All the Boys I’ve Loved Before by Jenny Han, Keeping the Castle by Patrice Kindl, A Lesson in Vengeance by Victoria Lee, Edgewater by Courtney Sheinmel, A Map For Wrecked Girls by Jessica Taylor

One thought on “I Capture the Castle: A Chick Lit Wednesday Review”