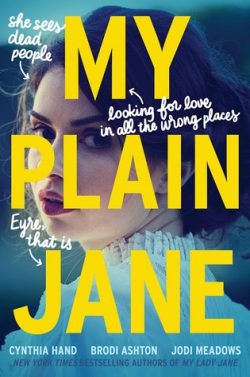 You might think you know Jane Eyre’s story: her childhood privation, her governess position at Thornfield Hall, and her immediate attraction to the dark and brooding Mr. Rochester. You’d be wrong. Mostly because you haven’t heard about the ghosts. Don’t worry, though, My Plain Jane (2018) by Cynthia Hand, Brodi Ashton, and Jodi Meadows has you covered.

This standalone alternate history novel inserts teenage aspiring author Charlotte Brontë into the world of her own making (with the addition of ghosts) as she chronicles the life of her best friend at Lowood, Jane Eyre, as inspiration for her first novel about the life of one “Jane Frere.”

Charlotte’s authorial ambitions and Jane’s plans to become a governess are thwarted when Jane’s ability to see ghosts comes to the attention of Alexander Blackwood, an agent for the once prestigious Society for the Relocation of Wayward Spirits. Determined to help his mentor restore the Society to its past glory, Alexander is keen to recruit Ms. Eyre as an agent–even if it means taking off his ever-present mask and accepting help from the overly eager Ms. Brontë and her screw up brother. This simple task spirals into a madcap story of ghosts, possession, revenge, and murder as Charlotte, Jane, and Alexander must set aside their differences to solve the mysteries of Thornfield Hall, help the Society (and the ghosts), and maybe even save the king of England in the process.

Narrated by Charlotte, Jane, and Alexander in alternating chapters My Plain Jane uses Jane Eyre as a loose framework for the plot which is populated with familiar characters from both the classic novel and history as well as numerous Easter eggs including a likely explanation for the origins of Charlotte’s chosen pen name and excerpts from Jane Eyre as seen in Charlotte’s trusty notebook.

My Plain Jane blends fact with fiction in a humorous story that offers a gentler and more hopeful outcome for Charlotte and her siblings along with a more plausible ending for anyone who ever wondered why Jane Eyre would marry a man twice her age after his first wife is discovered in the attic. A must-read for fans of My Lady Jane or Jane Eyre and a fun alternative for fans of paranormal romances.