This year Nicole and I were both approved to attend BookExpo as Press and I have to admit it felt like order was restored. I decided to keep things simple this year and had very few big priorities. With the event being two days (without any added things) it was also lower key that it had been in a while.

Nicole and I started the day with a very circuitous hunt for registration to pick up our badges (this also included both of us accidentally ending up in the International Franchise Expo registration line but we quickly realized our mistake).

With badges in hand, it was time to do some waiting for the show floor to open.

I started the day with a selfie. As one does.

This was also the debut of my shorter hair cut after a failed attempt to grow it out this winter. I cannot tell you how happy I am to have short hair again!

Here’s my badge (I managed to get some flair bright and early):

The day started at Macmillan. They were very organized this year. All of their in-booth signings were ticketed and you could pick up tickets in the morning at 9am when the floor opened. I had expected it to be crazy hard to get a ticket for Victoria Schwab’s signing but it wound up being very mellow for both of us to get tickets.

With that secured it was time to venture to the autographing area.

A couple of years ago when BookExpo was in Chicago one of the highest priority (and most nail biting) books to get was Three Dark Crowns. This year when I heard that Kendare Blake was signing paperback editions, I knew that her signing would be my first stop of the day.

Do you remember when The Luxe came out ten years ago? I still love seeing the lavish covers with girls in enormous gowns on shelves in the library and I am stoked that Godbersen has a new historical fiction title coming out about Chicago’s Great Fire. (Unrelated sidebar: Watch for repackaged covers of The Luxe series for the ten year anniversary!)

Here’s Anna with a copy of When We Caught Fire. (She was so nice and even got in touch from my card after her signing!)

For the last couple of years I have been a part of the selection committee that chooses titles for BookExpo’s Young Adult Editor’s Buzz panel. I was able to read the first fifty pages of each and I’m happy to report that this year all five final titles had my vote. I was very happy to have the opportunity to hear all of the editors talking about these books in person and I can’t wait to read them. 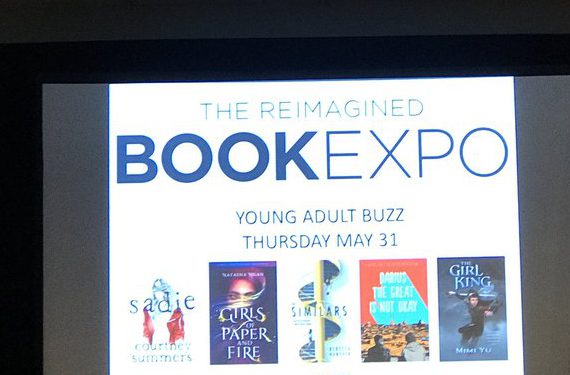 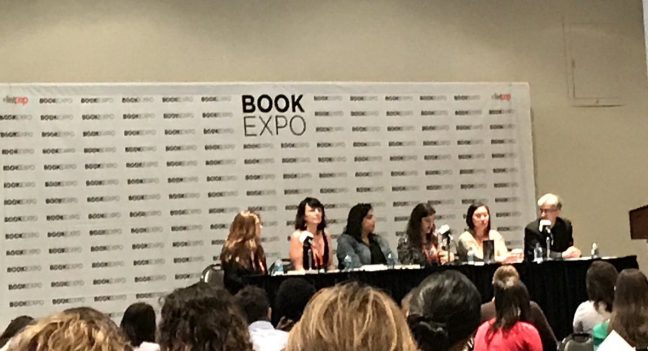 After the panel it was back to autographing!

S. L. Huang is a Tor author. Her new YA series starter sounds like a blast: Cas is a math whiz who can do calculations in her head to help her dodge bullets, fight men twice her size and more. Cas thought she was the only one with a superpower but then she runs up against a power hungry telepath. Cas should have all of the skills she needs to save the world. But firs she has to decide if she can trust the thoughts in her own head.

I also saw Deb Caletti signing ARCs of A Heart in the Body in the World but such was my excitement and fluster at seeing Deb Caletti that I totally forgot to take a picture.

After lunch it was time to head to Macmillan for Victoria Schwab’s signing. I’ve been reading Victoria’s book since her debut The Near Witch came out and it’s so wonderful to see how much her fan base and following has grown since then. I love having the new paperback of Vicious right in time to reread before Vengeful hits shelves this fall. I’m ready to see my favorite villains again. I also briefly got to say hi to Alexis who is one of my favorite publicists to work with at Tor. Yay!

If there’s one thing I always do at BookExpo, it’s wait in lines. The afternoon had a lot more of that.

One weird bonus of waiting on line was that I was next to Mary Higgins Clark’s signing and was able to take a picture like a total creep. She seems really nice! A woman in line also got wise to my stalking and asked me to take a picture so I feel like it all worked out in the end. 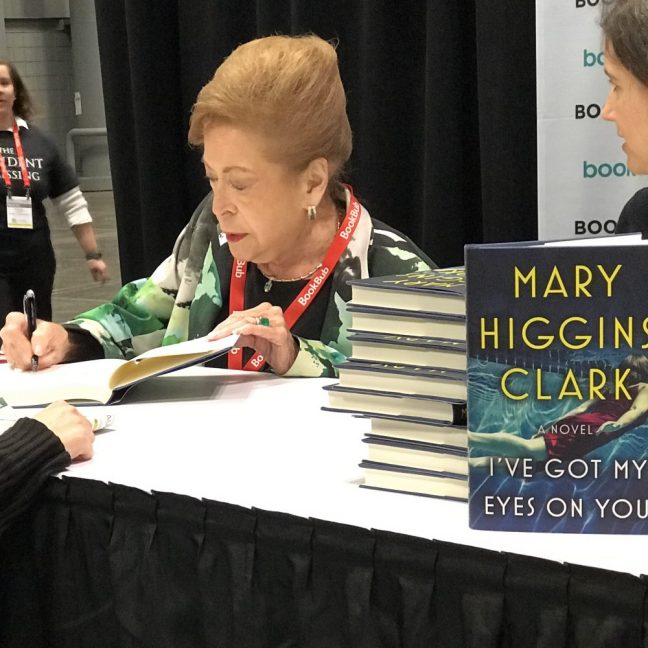 Even with the people watching opportunities, some of the lines started to feel a little long when I was alone while Nicole saw other authors. It got me down.

And eventually I got to see Natasha Ngan and get a signed copy of Girls of Paper and Fire which promises to be a lush, epic fantasy about a girl who is recruited to serve as a concubine for the Emperor–and everything she is willing to do to avoid that fate.

It’s a big year for fantasy novels featuring badass heroines so my next signing was Mimi Yu for her debut The Girl King about two sister fighting for their places in court and for the crown.

After wandering the show floor for a bit it was time to head over to Disney for the last signings of the day: Roshani Chokshi signing Aru Shah and the End of Time and J. C. Cervantes signing The Storm Runner–these are both part of the new Rick Riordan Presents imprint that Riordan started with Disney.

After a very successful day it was time to head home, rest up, and get ready for day two!

Here are all of the books I picked up on day one of BookExpo 2018:

Check back tomorrow for my recap of day two!