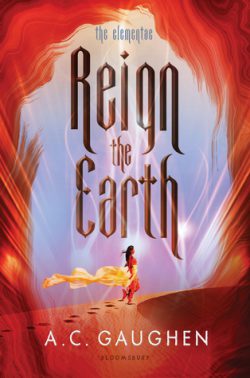 Shalia loves the desert and her place there with her family. But she also knows that her people are desperate for piece and it’s in her power to give them that. Shalia is willing to give up her freedom and leave the desert if it means her family will be safe.

Marrying a stranger and becoming Queen of the Bonelands is a terrifying prospect but no more so than watching more of her family die as the Bonelands try to track down the resistance movement that’s been plaguing them.

Shalia’s hopes of finding love in her arranged marriage are soon dashed when she realizes that her husband, Calix, cares more for power than he ever will for her. Calix is determined to destroy the few remaining Elementae–people who can control mysterious elemental magic–like Shalia’s best friend and, disturbingly, like Shalia herself.

Struggling to hide her growing powers from Calix and make sense of the dangerous murmurs of rebellion Shalia will soon have to choose decide if she is willing to give up her own future in a bid for peace in Reign the Earth (2018) by A. C. Gaughen.

Reign the Earth is the first book in Gaughen’s Elementae series.

This fast-paced adventure is set in a world where magic has been forced into hiding and dangers lurk everywhere. While Shalia struggles to resign herself to the future she chose for herself she also longs for more as she begins to realize she can no longer live with only the well-being of her family in mind.

A dense beginning filled with clunky world building bog down the start to this otherwise sweeping story. While brown skinned Shalia is a daring and sympathetic heroine, her first person narration is often narrow in focus making the pacing slow and adding misplaced naivete to an otherwise often dark story of magic, abuse, resilience, and strength.

Recommended for fans of high fantasy, fierce heroines, and readers who enjoy novels with an evocative setting.

Possible Pairings: The Wrath and the Dawn by Renee Ahdieh, Roar by Cora Carmack, The Girl of Fire and Thorns by Rae Carson, The Star-Touched Queen by Roshani Chokshi, The Glass Spare by Lauren DeStefano, A Thousand Nights by E. K. Johnston, Furyborn by Claire Legrand, The Orphan Queen by Jodi Meadows, An Ember in the Ashes by Sabaa Tahir, Realm of Ruins by Hannah West