“If you’re delicate, it means no one has tried to break you.” 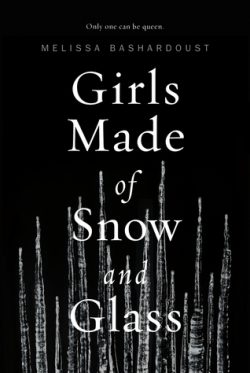 Mina is sixteen years old when she comes to Whitespring. Her mother is dead and she sees few options for a future. When Mina learns that her father, a dangerous magician, has replaced her own weak heart with one made of glass she realizes that even the prospect of love is impossible. What Mina does have is beauty. And a secret. She hopes to be able to use both to stay clear of her father and win the king. For if the king and his kingdom fall for her beauty, surely they will be able to love her even if her glass heart makes her incapable of returning the feeling.

Lynet has always looked like her mother–a resemblance that is even more striking now that her sixteenth birthday is approaching–but her personality could not be more different. Lynet does not want to be beautiful or delicate like her dead mother. She wants to be strong and fearless like her stepmother Mina. When Lynet learns the truth, that a magician made her out of snow in her mother’s image, it feels like her destiny will never be hers to control.

When the king names Lynet queen of the southern territories instead of Mina, a rivalry forms between them. As previously unbreakable bonds are tested and friends threaten to become enemies both Mina and Lynet will have to decide if they are capable of transcending their beginnings to forge a new future in Girls Made of Snow and Glass (2017) by Melissa Bashardoust.

In her debut novel Bashardoust offers a feminist retelling of the fairy tale of Snow White with a focus, of course, on the relationship between daughter and step-daughter. The novel alternates between close third person chapters detailing Lynet’s present struggles to claim her own fate as her birthday approaches with Mina’s past and her early days in Whitespring.

Bashardoust’s writing is methodical with a slow start to draw readers into the story and introduce both Lynet and Mina. Instead of relying on familiar tropes and stereotypes, both Lynet and Mina are well-developed characters with complicated motivations and conflicting feelings. Both women are ambitious and see the crown as a way to take control of their own lives. But what does that ambition mean compared to years spent as a family? After all, there can only be one queen.

This fledgling rivalry forms the majority of the plot while explorations of magic, their own strange beginnings, and what it means to love help to flesh out the story. Lynet’s infatuation and eventual relationship with the new palace surgeon–a woman named Nadia–adds another dimension to the story.

While the characters and plot are handled well, the overall world building is lackluster. While readers see much of the palace, the rest of Whitespring is unexplored within the text. The magic system is poorly explained with only vague explanations for how Mina and Lynet can live. The curse that shrouds Whitespring in winter year round is equally vague.

Girls Made of Snow and Glass is a thoughtful and thoroughly feminist fairy tale. Recommended for fans of retellings and readers who prefer character-driven novels.

Possible Pairings: The Candle and the Flame by Nafiza Azad, The Hazel Wood by Melissa Albert, A Season of Sinister Dreams by Tracy Banghart, The Language of Thorns by Leigh Bardugo, Three Dark Crowns by Kendare Blake, Frostblood by Elly Blake, Roar by Cora Carmack, Graceling by Kristin Cashore, Poisoned by Jennifer Donnelly, Rule by Ellen Goodlett, A Spindled Splintered by Alix E. Harrow, Stain by A. G. Howard, Ash by Malinda Lo, The Young Elites by Marie Lu, The Orphan Queen by Jodi Meadows, Spinning Silver by Naomi Novik, Snow Like Ashes by Sarah Raasch, Kingdom of Ash and Briars by Hannah West, Maleficent