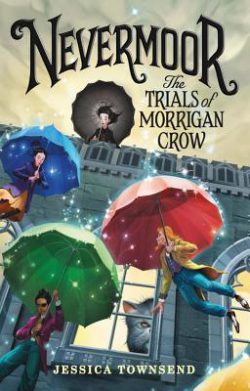 Morrigan Crow is cursed and doomed to die on her eleventh birthday on Eventide night. She is blamed for every bit of bad luck and misfortune that plagues the residents of the town of Jackalfax in the Wintersea Republic.

When Eventide arrives early ushering a new Age across the realm, Morrigan is faced with the prospect of her premature death until a strange man named Jupiter North arrives. Together the two escape the Hunt of Smoke and Shadow and arrive in the Free State city of Nevermoor. Miraculously alive and possibly no longer cursed, Morrigan can make a fresh start.

With Jupiter’s help she has the chance to compete in a series of trials for a place in Nevermoor’s most revered group: The Wundrous Society. If she makes it she’ll also earn her place in Nevermoor and finally have a home and family who cares about her.

Despite Jupiter’s assurances, Morrigan dreads the final Show Trial where the remaining competitors will have to demonstrate their astounding talents–something Morrigan is quite certain she doesn’t possess. Morrigan will have to step boldly and learn to trust her new friends if she hopes to pass the trials and join the Wundrous Society in Nevermoor: The Trials of Morrigan Crow (2017) by Jessica Townsend.

Nevermoor is Townsend’s debut novel and the start of a middle grade trilogy. The story revolves around Morrigan’s struggle to find her place and discover her own worth. All while she completes magical tasks and investigates the strange world of Nevermoor.

This dynamic novel is filled with intricate and carefully detailed world building that brings the renowned figure of Jupiter North and the rest of Nevermoor vibrantly to life. Set over the course of Morrigan’s year of trials this entertaining and fast-paced story is filled with wondrous things like the Hotel Deucalion where Morrigan’s room changes to suit her mood, the Wundrous Society grounds which turns the weather up a notch, and even a giant talking “Magnificat” named Fenestra.

Nevermoor is filled with adventure, magic, and wonder. Readers, like Morrigan herself, will feel at home in these evocative pages where magic and confidence go hand in hand. Highly recommended.

Want to know more? Check out my interview with Jessica about her debut over at SLJ.com

Possible Pairings: Ophelia and the Marvelous Boy by Karen Foxlee, The Doldrums by Nicholas Gannon, Foxheart by Claire Legrand, Furthermore by Tahereh Mafi, A Corner of White by Jaclyn Moriarty, The Keeper of the Mist by Rachel Neumeier, The Witch Boy by Molly Ostertag, The Queen’s Rising by Rebecca Ross, The Cabinet of Wonders by Marie Rutkoski