“One must work and be bold if one really wants to live.” 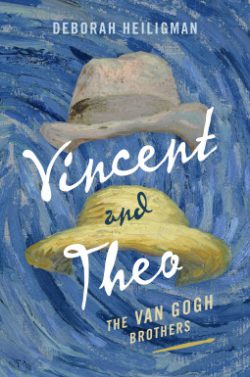 Vincent Van Gogh’s life is the stuff of legend filled with passion, creativity, and the  larger-than-life personality of a man whose paintings would change the art world forever with their contributions to Post-Impressionism. Maybe you’ve heard about his explosive time in the Yellow House with fellow artist Paul Gauguin. Maybe you know the salacious details of when he cut off his own ear.

No one knew what the future would think of Vincent when he was a young man in the Netherlands. Vincent was known for his passions, yes. But he was also erratic, bombastic, and to put it frankly, difficult. Even Vincent’s favorite brother, Theo, sometimes found him hard to take. The brothers had a lot in common. They both had red hair and neatly trimmed beards–in fact, if you look at Vincent’s self-portrait and his portrait of Theo you might have a hard time telling them apart, especially when they swap hats. They wrote each other copious letters and shared a love of art. They would both die in their thirties but the legacy they left behind would last far longer.

Vincent didn’t realize he wanted to be a painter until he was in his twenties–he made up for the late start with a zealous commitment to his work and a prolific output over the course of his short life. Vincent only started to get the recognition he craved near the end of his life. Even then his true genius wouldn’t be recognized until years after his death.

While Vincent created the art, it was Theo who helped build the legend. Theo nurtured Vincent’s talents, supported him financially, and made sure his paintings were seen in galleries that were beginning to move away from the old masters and show art in newer, brighter and more abstract styles.

Now, so many years after their deaths, it’s hard to imagine a time when their lives weren’t intertwined. But it wasn’t always like that. It all started on a long walk to a windmill and a pledge of lifelong friendship and commitment to both each other and to their mutual work. That fateful day–the pledge, the commitment, and the companionship–would shape the lives of both brothers as they chased their passions and ambitions both together and apart over the course of their short, turbulent lives in Vincent and Theo: The Van Gogh Brothers (2017) by Deborah Heiligman.

Vincent and Theo is the 2017 winner of the Boston Globe-Horn Book Award for Nonfiction.

Heiligman’s latest book explores the complex relationship between Vincent and Theo Van Gogh as both men tried to define who they wanted to be and to pursue their dreams. Vincent and Theo rarely lived in the same place as they grew older. But they wrote letters to each other constantly detailing their hopes, their failures, and details of their daily lives. Of course, they also talked often about art as it related to Theo’s career as an art dealer and to Vincent’s work as an artist.

These letters serve as a centerpiece to Vincent and Theo and tie together this story of family, friendship, devotion, and art. Short chapters and inventive formatting make even familiar information feel novel as Heiligman delves deep into Vincent’s early life, his changing relationship with Theo, and his rocky journey as both an artist and a young man. Theo, the lesser known of the brothers, is shown equally as he struggles with his own demons while he searches for professional success and love.

Vincent and Theo: The Van Gogh Brothers reframes Vincent and Theo’s lives by examining the give and take in their relationship and the ways in which the brothers influenced each other. New perspectives on key points in Vincent’s life as well as detailed information about the brothers’ early devotion to each other–and the previously little known painting that documents that moment–add new insights even for readers familiar with the artist and his art.

Vincent and Theo: The Van Gogh Brothers is a fascinating and informative story that tenderly explores the momentous and sometimes tragic lives of two of the art world’s most important figures. A must read for art enthusiasts, history and non-fiction buffs, and anyone who needs a reminder that it’s never too late to follow your passions.