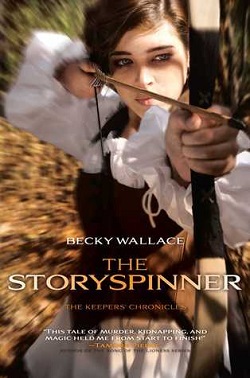 The Keepers have been searching for the long-missing princess for years. They have used their magic and more traditional skills but the princess, long rumored dead, has proven elusive leaving room for rival dukes to compete and connive as they struggle to claim her throne for themselves.

Johanna–a Performer left without a troupe after her father’s grisly demise–thinks such matters are far above her station in life. Until murdered girls begin turning up across the kingdom bearing a striking resemblance to Johanna.

Desperate to support her family and a victim of circumstance Johanna is soon forced to work with Lord Rafael DeSilva. Unfortunately for her, Rafi is boorish and insufferable. Not to mention he shares an equally low opinion of Johanna.

When her path aligns with the hunt for the princess, Johanna finds herself at the center of a dangerous web of secrets that could cost Johanna her life in The Storyspinner (2015) by Becky Wallace.

The Storyspinner is Wallace’s debut novel and part of a duology that concludes in The Skylighter.

This novel is written in close third person and alternates between seven points of view including Johanna and Rafi. This multitude of main characters allows Wallace to balance two narrative threads that eventually converge and maintain some surprise although transitions between chapters and characters are often abrupt. Making so many characters into “main” characters leaves little room to develop any of them. Instead of a multi-faceted ensemble cast, The Storyspinner feels like it is populated by one note characters including from the sage wielder of magic, the resentful sister trying to prove herself, and more.

Wallace situates her fantasy in a fictional world that borrows heavily from Portuguese culture with language, food, and more. While this adds flair to the story, it seems out of place with an explanation for where these elements come from.

The Storyspinner starts strong with an intriguing premise that fails to get very far before it is mired in an overly large cast of characters. Recommended for readers looking for a plot driven story that is light on the world building and heavy on the action.

Possible Pairings: Red Queen by Victoria Aveyard, The Orphan Queen by Jodi Meadows, The Keeper of the Mist by Rachel Neumeier, Snow Like Ashes by Sara Raasch, The Shadow Queen by C. J. Redwine, The Sin Eater’s Daughter by Melinda Salisbury