BookExpo was held earlier this month. After a bit of waffling, I wound up going again this year with Nicole. I was lucky enough to be involved with selecting the books for the 2017 Young Adult BookExpo Editors’ Buzz Panel and was thrilled to receive a Speaker badge and have the chance to see the panel in person. (I also received a Press badge but only heard about it several hours into the show but that’s another story.)

BookExpo itself was scaled back a lot this year with the event happening across two days instead of three and generally a more laid back feeling.

The day before I got to attend School Library Journal’s Day of Dialog which was a fun day of panels and conversations about upcoming titles and publishing trends. I got to hang out with Stacy, a librarian friend I met through Twitter, listen to publishing pitches about Fall 2017 children’s and YA titles.

SLJ DoD also had amazing keynotes from Gene Luen Yang (talking about being a nerd, finding his people, and his Read Without Walls challenge); Megan Whalen Turner talked about the process behind making the maps for Thick as Thieves and the new paperback reissues of the rest of her series; Kwame Alexander closed the day with a keynote about his upcoming title Solo. The day ended with Roger Sutton and Kwame Alexander announcing the winners of the Boston Globe-Horn Book Prize and I’m still thrilled that Vincent and Theo by Deborah Heiligman took home the non-fiction prize! If you want to see some of my live tweets from the Day of Dialog you can find them on twitter.

While I tried to frame my week-long vacation to have down time before and after BookExpo, it was a lot to head to Javits immediately after Day of Dialog. Still, Nicole and I were ready bright and early. 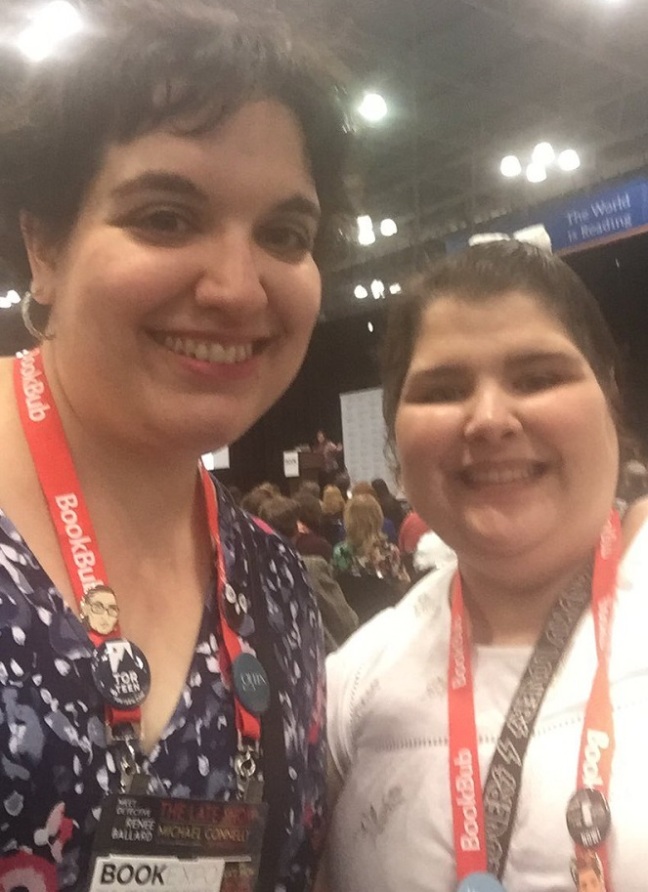 For the first time I also got the point of free buttons–they look great on badge lanyards!

Day One was pretty chill with Nicole and I catching the YA Editors’ Buzz panel along with a few signings.We also got to meet up with Cecelia and Sajda for a lot of the day but because it’s me, I mostly forgot to take pictures.

I was very happy to catch Gabrielle Zevin who regular readers will know is one of my absolute favorite authors and a generally delightful person.

The afternoon saw signings with Megan Whalen Turner (which OMG still can’t believe it), Lynn Weingarten (I love seeing Lynn at real life events–definitely as fun as talking on Twitter!), and Charlie Jane Anders (who is easily the most enthusiastic author I’ve ever met and loved my Ruth Bader Ginsburg pin).

There was also a fair bit of waiting in lines for some “big” signings.

Jane, Unlimited has become a really important book for me–I’m not totally sure why since I’m not a Graceling superfan but it was very high priority to see her and, happily after a long wait in line, it all worked out! After that and a crazy line for E. Lockhart, Nicole and I decided to call it quits and haul our books and ourselves out of the Javits.

Day two started with exploring the floor and visiting Macmillan’s Grishaverse booth which had a photobooth, buttons, and samplers from Leigh Bardugo’s forthcoming The Language of Thorns.

I am all about these buttons which are matte and colorful and (for mine at least) say Queen and Witch.

Nicole and I also got to take some photos and even got this super cool gif version!

After exploring the floor for a bit, it was time for a crazy line for Marie Lu’s signing of Warcross.

The line was long but fast and I’m excited to dive into this sci-fi adventure soon!

Excitingly Isabel Bandeira was signing Dramatically Ever After in the afternoon. I love talking to Issy on Twitter and so enjoyed her debut Bookishly Ever After and interviewing her about it so it was amazing to get to see her again!

After that most of the afternoon was spent scoping out the kind of intense line for Holly Black’s signing and just wandering around the floor. I was skeptical of the Owlcrate booth but it wound up being really fun with a wheel to win different items, buttons, stickers, and cute tote bags.

I usually don’t do pictures with authors because it takes up time and I generally would prefer to use the time to talk to the authors. BUT I made an exception for Holly Black because, well, it’s Holly.

After that Nicole and I were fried so we headed home to have an early dinner with my mom before heading out for Macmillan’s publicist party.

Macmillan’s Fierce Reads party is an annual thing where bloggers get to mix and mingle, meet Macmillan’s wonderful publicity team, and chat with several authors. I am not the best at cold mingling (I need time to warm up) but I did get to meet Anna-Marie McLemore in person after tweeting her a few times. She is as lovely and mermaid-like in person as you’d expect. It was also great to catch up with Gina Gagliano–the excellent publicist for First Second Books.

My favorite moment of the night was definitely meeting Emmy Laybourne. Berserker already sounded like it was right up my alley but after talking to Emmy I’m even more excited to read it. Nicole and I also got to talk to Kami Garcia for a fair chunk of the party which made me think I have to give The Lovely Reckless a try soon!

Nicole, Cecelia, Sajda and I also finally remembered to take a picture together before the end of the night!

I’ll also leave you with some shots of all of the books I got from BookExpo!

I’m also sharing the BookExpo wealth with some giveaways!

4 thoughts on “BookExpo and SLJ Day of Dialog 2017 Recap: All the books, some of the pics, GIVEAWAYS”