“And if there is no hope of saving the thing we love in their original form, we must save them however we can.” 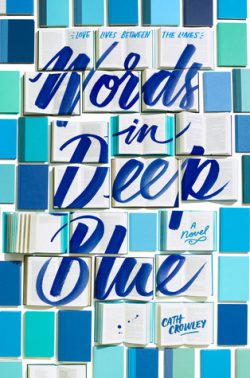 Rachel Sweetie lays her heart bear when she writes Henry Jones a love letter and leaves it in his favorite book in his family’s bookshop. It is the ultimate grand gesture before she moves away with her family.

Years later Rachel is moving back to the city and, unbelievably, picking up a job at Howling Books. But nothing is the same as when she left because her brother Cal drowned months ago. She knows she isn’t the girl she was before–failing Year 12 and abandoning her dream of becoming a marine biologist prove that well enough. But she isn’t sure how she can be anything else when her brother is gone.

All Henry knows is that his best friend is back and, he hopes, willing to pick up their friendship where they left off. Henry could use a friend right now. He is perfectly content working in the family bookshop, hunting for secondhand books to buy and living upstairs with his father and his younger sister George. Henry’s comfortable world is shattered when his girlfriend dumps him and his parents start arguing about selling the bookshop. With everything changing, Henry’s perfect if unambitious future is threatened.

Howling Books is filled with memories in used books, love letters, and messages exchanged through the shop’s Letter Library. As she rediscovers the bookstore and the boy she left behind, Rachel realizes that is is possible to breathe and keep going even when everything feels broken. She and Henry both begin to understand that second chances can be as beautiful as new beginnings in Words in Deep Blue (2017) by Cath Crowley.

Crowley explores familiar themes of grief and reclaiming what was lost. Words in Deep Blue alternates between Rachel and Henry’s first person narrations. The lighthearted banter and romance of this story belie the deep melancholy and sadness that has settled over Rachel like a shroud after her brother’s death. Rachel’s pragmatic and introspective tone contrasts well with Henry’s more boisterous narration filled with references to books and poetry.

Rachel and Henry’s fragile relationship mends itself in front of the backdrop of the bookstore and its own uncertain fate. As Rachel works to catalog the notes and memories in the shop’s Letter Library other stories unfold and reveal secrets about longtime customers, Henry’s sister George, and even Rachel’s brother. These threads come together by the end of Words in Deep Blue in a neat but ultimately bittersweet conclusion as Rachel and Henry realize that some losses cannot be avoided.

The scope of the plot leaves little room in this slim novel for fully realized characters but the sketches readers do receive are more than enough to make this story crackle with potential. The evocative setting, particularly the world within Howling Books, adds another dimension to this story. Words in Deep Blue is a thoughtful story about healing and reunions as well as memory and salvaging that which is lost–whether it’s a beloved person or a cherished place. Recommended.

Possible Pairings: Starry Eyes by Jenn Bennett, What to Say Next by Julie Buxbaum, Unclaimed Baggage by Jen Doll, Royals by Rachel Hawkins, The Careful Undressing of Love by Corey Ann Haydu, Comics Will Break Your Heart by Faith Erin Hicks, The Fashion Committee by Susan Juby, The Last Time We Were Us by Leah Konen, Drawing the Ocean by Carolyn MacCullough, This Adventure Ends by Emma Mills, Flannery by Lisa Moore, The Square Root of Summer by Harriet Reuter Hapgood, Nice Try, Jane Sinner by Lianne Oelke, Recommended For You by Laura Silverman, This Time Will Be Different by Misa Sugiura, Stay Sweet by Siobhan Vivian, Places No One Knows by Brenna Yovanoff