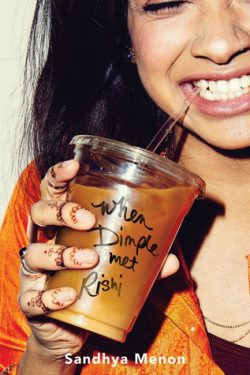 What happens if you meet the exact right person for you at the exactly wrong time?

Dimple Shah wants to go to Stanford, focus on coding, and start her career. She would like to go to Insomnia Con this summer before she starts college to participate in the coding competition and possibly meet her idol Jenny Lindt.

Dimple isn’t interested in clothes, contacts, or makeup. She definitely doesn’t want a relationship or an “Ideal Indian Husband”–not right now and possibly not ever. When her parents agree to pay for Dimple to attend Insomnia Con, it feels like maybe they’re both finally understanding who Dimple is and embracing her dreams and ambitions.

Then again, maybe not.

Rishi Patel knows that it’s up to him to follow tradition and respect his parents’ wishes. It’s possible that Rishi isn’t passionate about engineering or MIT but he knows he should stick to the responsible and safe choice.

Rishi is a romantic but he also wants a solid partnership in the future. He trusts his parents when they try to set up an arranged marriage with the daughter of family friends. It should be simple. Rishi can even meet her at Insomnia Con and woo her. It will be perfect.

Dimple and Rishi figure each other out pretty quickly. They have nothing in common. They want different things. But they also make each other laugh and might be able to help each other be their best selves–if they can just give each other a chance–in When Dimple Met Rishi (2017) by Sandhya Menon.

Menon’s writing is filled with evocative descriptions of San Francisco over the course of the three weeks Dimple and Rishi spend there for Insomnia Con. Dimple and Rishi’s relationship plays out against this backdrop of coding and competition along with a few side plots involving Dimple’s roommate Cecelia and Rishi’s younger brother Ashish.

When Dimple Met Rishi is a sweet romantic comedy with a lighthearted premise but it doesn’t stop there. Dimple and Rishi are both first generation Indian-Americans (their parents immigrated from India) and they are dealing with it in different ways. Dimple rails against traditions and values that seem determined to relegate women to successful marriages and not much else; she wants to make her own way in the world and she isn’t sure it matters if that goes against her parents’ expectations. Rishi revels in being part of such an old and amazing culture; he places so much value on traditions that he’s willing to sacrifice his own dreams because of them.

Although Dimple and Rishi are both eighteen they read young and feel like authentic teens facing big changes as summer ends and college approaches. Slow pacing toward the middle and some contrivances near the end of the book do little to diminish this enjoyable story. When Dimple Met Rishi is a thoughtful, clever read. A satisfying story about two teens who manage to find a lot to appreciate (including themselves) once they find each other. Highly recommended and guaranteed to leave readers smiling.

Possible Pairings: Bookishly Ever After by Isabel Bandeira; Alex, Approximately by Jenn Bennett; Tell Me Three Things by Julie Buxbaum; Unclaimed Baggage by Jen Doll; In a Perfect World by Trish Doller; I Wanna Be Where You Are by Kristina Forest; I Believe in a Thing Called Love by Maurene Goo; To All the Boys I’ve Loved Before by Jenny Han; Seoulemates by Susan Lee; Say You’ll Remember Me by Katie McGarry; The Field Guide to the North American Teenager by Ben Philippe; Simone Breaks All the Rules by Debbie Rigaud; Last Chance Books by Kelsey Rodkey; Windfall by Jennifer E. Smith; Girl Against the Universe by Paula Stokes; Lucky in Love by Kasie West; Six Impossible Things by Fiona Wood; Places No One Knows by Brenna Yovanoff