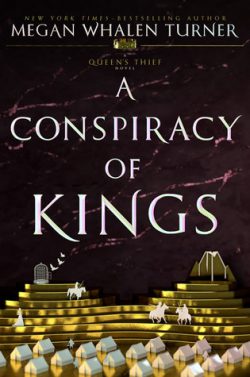 Sophos has always known that he is too soft and too scholarly to be a proper heir to his uncle the king of Sounis. When he is exiled to the island of Letnos after parting ways with the magus and a thief who proved too clever for his own good, Sophos is free to spend his days reading poetry and contemplating philosophy even if it is in the company of an odious tutor.

All of that changes the moment Letnos is attacked and Sophos is abducted. Hidden away and rendered unrecognizable, Sophos has a chance to turn away from his responsibilities as Sounis’ heir.

It is not easy to become a king. But it turns out it’s even harder to forsake your own country. Navigating the murky waters of friendship and sovereignty, Sophos will have to decide if old friends can become new allies and whether or not honor, or freedom for that matter, have anything to do with ruling a country in A Conspiracy of Kings (2010) by Megan Whalen Turner.

A Conspiracy of Kings is the fourth book in Turner’s Queen’s Thief series and continues Sophos’ story–a character first introduced as one of Gen’s travel companions back in The Thief. Sophos narrates this novel in the first person. Throughout most of the novel he is talking to someone as he relates the story of what brought him all the way to Attolia after a dangerous journey across Sounis. The second person is a hard tense to negotiate but it works well here and realizing who Sophos is talking to is a revelation in itself.

Perception always plays a role in Turner’s books and A Conspiracy of Kings is no exception. The manipulations here are even more subtle as Sophos tries to fit the present Eugenides as king of Attolia with his memories of Gen the thief. In addition to that, Sophos’ own self-perception also comes into play with a fascinating character study through his narration.

Sophos is a guileless character and he is very aware of his limitations throughout the story. He is sensitive, he blushes at the drop of a hat, he is not an experienced swordsman, the list goes on. Because of this, Sophos’ narration is refreshingly forthright and direct. Sophos is quick to explain his internal struggles and even some of his shortcomings as he tries to come to terms with the shocking reality that he is responsible for the fate of an entire country. Of course, that only tells part of the story as Sophos fails to notice the ways in which he himself has changed and grown on his journey to becoming a king in his own right.

Much of this series focuses on Eugenides’ journey from boy to man and by extension from his path from man to king. A Conspiracy of Kings is a slightly different story as Sophos acknowledges not only that he is a king but also that he might have been meant to be king all along.

This book has my favorite ending of the entire series. I love the dialogue that concludes this story and I especially enjoy tracing the path of Sophos and Gen’s friendship as they begin to meet each other on equal footing. A Conspiracy of Kings is another arresting story filled with evocative prose and characters that are guaranteed to resonate.

If you enjoy A Conspiracy of Kings, you can read more about Eugenides (and Eddis, Sounis, and Attolia) in The Thief, The Queen of Attolia, The King of Attolia and Thick as Thieves.

Possible Pairings: The Wrath and the Dawn by Renee Ahdieh, The Candle and the Flame by Nafiza Azad, Plain Kate by Erin Bow, The Girl of Fire and Thorns by Rae Carson, Graceling by Kristin Cashore, Vessel by Sarah Beth Durst, The Lost Sun by Tessa Gratton, The Shadow Behind the Stars by Rebecca Hahn, Book of a Thousand Days by Shannon Hale, Seraphina by Rachel Hartman, A Thousand Nights by E. K. Johnston, Howl’s Moving Castle by Diana Wynne Jones, Finnikin of the Rock by Melina Marchetta, Dreamhunter by Elizabeth Knox, Grave Mercy by Robin LaFevers,Soundless by Richelle Mead, Sabriel by Garth Nix, The Winner’s Curse by Marie Rutkoski, The Scorpio Races by Maggie Stiefvater