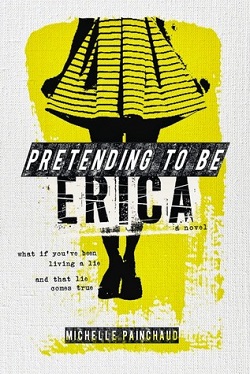 Erica Silverman was kidnapped when she was five years old and she hasn’t been seen since. Two other girls came to Las Vegas to pretend to be Erica and try to steal her life. They were both caught. But they didn’t have Violet’s father Sal backing them.

Sal knows that Erica is gone and he has something none of the previous con artists did: Erica’s DNA. He also has been training Violet to con the Silvermans since she was five years old. Violet shares Erica’s blood type and has undergone plastic surgery to make sure her face matches the age projections of Erica. She isn’t going to make the same mistake the other Ericas made. Violet isn’t there to stay; she doesn’t need to become Erica forever.

All Violet has to do is keep up the charade long enough to steal the coveted Silverman Painting. It should be easy. Except the longer she spends as Erica, the more Violet wants the stability and comforts of Erica’s life for herself. Violet knows why she is living with the Silvermans, she knows exactly how to sell the lie, she knows the endgame. The only thing Violet doesn’t know is what to do when she wants to believe the con herself in Pretending to Be Erica (2015) by Michelle Painchaud.

Pretending to Be Erica is Painchaud’s debut novel. Violet narrates her time impersonating Erica in the first person while flashbacks to her childhood as Violet are related in third person.

While the writing is sleek and sharp, this novel really shines with its protagonist. Violet has no idea what a real family or a true friend looks like before she arrives at the Silverman home. Affection and basic comforts are alien concepts to her and even the friends she begins to make when Erica returns to high school feel strange and dangerous. Against the backdrop of her con, Violet begins to understand that she’s allowed to want more than a precarious life built on lies and tricks.

Pretending to Be Erica has all the earmarks of a traditional thriller or heist mystery. Tension is high as the stakes increase and Violet’s carefully drawn lines between her real life as Violet and her fake life as Erica begin to blur. Suspense and the numerous moving parts of the con come together for a high action conclusion.

Pretending to Be Erica is the perfect choice for readers who like their heroines to be as intense and unexpected as their mysteries. A fast-paced yet introspective story about a con, a heist, and a girl doing the best she can to save herself when it start to feel like she could lose everything.

Possible Pairings: Like Never and Always by Ann Aguirre, The Leaving by Tara Altebrando, Emmy and Oliver by Robin Benway, What I Saw and How I Lied by Judy Blundell, Heist Society by Ally Carter, Charlie, Presumed Dead by Anne Heltzel, The Truth Commission by Susan Juby, Don’t You Trust Me? by Patrice Kindl, We Were Liars by E. Lockhart, I Am Princess X by Cherie Priest, Daughter of Deep Silence by Carrie Ryan, The Girls I’ve Been by Tess Sharpe, Liars, Inc. by Paula Stokes, Thieving Weasels by Billy Taylor, Suicide Notes from Beautiful Girls by Lynn Weingarten