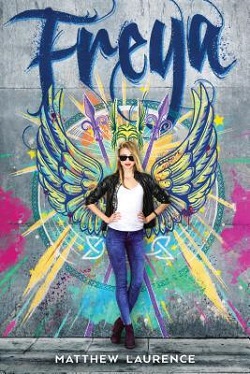 In her heyday, Sara Vanadi was Freya, the Norse goddess of love, beauty, war, and death. But it turns out gods get their power from belief and in the twenty-first century there aren’t a lot of true believers left.

Sara Vanadi has spent the last twenty-seven fairly comfortable years living in a mental hospital. Sure the clothing options are limited, and maybe it’s not the most happening place. But it turns out it’s a great option for a former goddess who needs to keep a low profile.

Sara’s twilight years are ruined when a representative from the shady Finemdi corporation tracks her down to make an offer: join the corporation and receive new believers or die. Sara chooses option three and goes on the run with her unwitting accomplice (and first worshiper in decades) Nathan in Freya (2017) by Matthew Laurence.

Freya is Laurence’s debut novel and the first book in a series.

This book is narrated by Sara/Freya who thanks to her unique position as a god offers an interesting perspective on the modern world. She is also unapolgetically curvy and comfortable negotiating traditional feminine roles (she loves fashion and food) while also taking on the role of hero as she fights bad guys. These flipped gender roles are expanded further with Nathan who is comfortable taking on domestic roles and acting as sidekick while he and Freya try to take on the megalithic Finemdi corporation.

Laurence begins this novel with a clever premise that is expanded thoughtfully as the book progresses. Freya explains her own origins and the internal logic of gods from her pantheon and beyond surviving into modern times (this includes fellow Norse gods, Hawaiian goddesses, some figures from Egyptian and Hindu mythology, and Jesus among others).

Despite the presence of larger-than-life gods and the high action beginning, Freya starts slow with Sara and Nathan going on the run and then literally standing still as Sara explains her position as Freya (something she chooses to withhold from both readers and Nathan for the first chapters of the novel despite the title eliminating any chances of a big reveal) and gathering the pieces they will need to go into hiding with new identities. Freya uses her some of her remaining powers as a god to gather the resources she and Nathan will need but even for a goddess things come together a bit too easily.

Freya is a novel that is fun and filled with action. Although the execution is interesting, the story is poorly paced with little time spent on characterization for anyone except the titular narrator. This novel will have the most appeal for readers (especially reluctant ones) who enjoy mythology and action. An obvious stepping stone for fans of Rick Riordan’s novels looking for something new.

2 thoughts on “Freya: A Review”