“I’ve been waiting for one thing, but love can be anything.”

“When there’s nothing left to salvage, we have to save ourselves.” 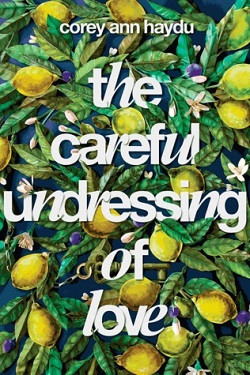 Everyone knows that Devonairre Street in Brooklyn is cursed. Being loved by a Devonairre Street girl ends in tragedy. Just look at the number of war widows on the street or the concentration of Affected families left without husbands and fathers after the Times Square Bombing in 2001.

Lorna Ryder and her mother have never put much stock in the curse even though they pretend to play along. Lorna celebrates a shared birthday along with Cruz, his sister Isla, Charlotte, and Delilah. She keeps her hair long and wears a key around her neck. She does everything she is supposed to just the way Angelika has advised since Lorna was a child.

But none of it seems to be enough when Delilah’s boyfriend Jack is killed in the wake of the grief and confusion surrounding another terrorist attack across the country. Lorna and her friends are shocked by Jack’s sudden death. Grieving and shaken, Lorna has to decide what this new loss means about the veracity of the curse and her own future as a part of Devonairre Street and away from it in The Careful Undressing of Love (2017) by Corey Ann Haydu.

The Careful Undressing of Love is Haydu’s latest standalone YA novel. Lorna narrates this novel with a breezy nonchalance that soon turns to fear and doubt as everything she previously believed about love and the curse on Devonairre Street is thrown into question. The style and tone work well with Haydu’s world building to create an alternate history that is simultaneously timeless and strikingly immediate.

Haydu’s characters are realistically inclusive and diverse. An argument could be made that it’s problematic that Delilah and Isla (the Devonairre Street girls who are not white) are the ones who suffer more over the course of this novel filled with loss and snap judgements by an insensitive public. But the same argument could be made that privilege makes this outcome sadly inevitable–a contradiction that Lorna notes herself when she begins to unpack her own privileges of being white contrasted with the burdens she has under the weight of the supposed curse and living as one of the Affected.

This story is complicated and filled with philosophical questions about grief and fear as well as love and feminism. While there is room for a bit more closure, the fate of Devonairre Street and its residents ultimately becomes irrelevant compared with Lorna’s need to break away to protect herself and her own future.

A quiet, wrenching story about the bonds of love and friendship and the ways in which they can break; a commentary on the stresses and pressures of being a girl in the modern world; and a story about self-preservation first. The Careful Undressing of Love is smart and strange, frank and raw, and devastating. Highly recommended.

Possible Pairings: Midnight at the Electric by Jodi Lynn Anderson, Words in Deep Blue by Cath Crowley, The Accident Season by Moïra Fowley-Doyle, The Midnight Dress by Karen Foxlee, The Once and Future Witches by Alix E. Harrow, Practical Magic by Alice Hoffman, The Truth Commission by Susan Juby, But Then I Came Back by Estelle Laure, We Were Liars by E. Lockhart, Tigers, Not Daughters by Samantha Mabry, Moxie by Jennifer Mathieu, Wild Beauty by Anna-Marie McLemore, The Disappearances by Emily Bain Murphy, I’ll Give You the Sun by Jandy Nelson, Bone Gap by Laura Ruby, Saint Death by Marcus Sedgwick, Wild Swans by Jessica Spotswood, The Walls Around Us by Nova Ren Suma, The Light Between Worlds by Laura E. Weymouth, The Sun is Also a Star by Nicola Yoon, American Street by Ibi Zoboi

You can also read my interview with the author about this book!