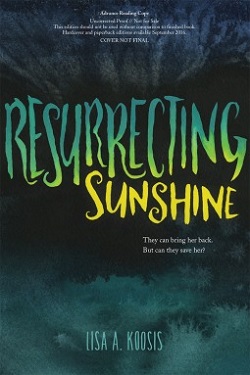 Adam Rhodes, Sunshine’s boyfriend and backup guitarist, wishes he could process his grief in private for both rockstar Sunshine and the girl she used to be when she was still called Marybeth and they were growing up in foster care. Instead Adam settles for dulling his senses–and the pain–with alcohol.

When Dr. Elloran shows up at Adam’s door he expects her to be looking for a last piece of Sunshine. Instead, she offers Adam the impossible: Elloran plans to use cloning and Memory Archiving Port (MAP) technology to bring Sunshine back to prove to the world (and her investors) that Project Orpheus can resurrect the dead.

The project will go forward with or without Adam, but if he plays along–helping this new Sunshine remember the final days of her life and restoring other degraded memories–he’ll have the chance to see Marybeth again. And maybe this time he can keep Marybeth alive and well.

As Adam remembers the tragedy that led to his and Sunshine’s fame, he is forced to confront painful memories of her death and begins to question if bringing Marybeth along the same path is right for anyone in Resurrecting Sunshine (2016) by Lisa A. Koosis.

Simplistic and utilitarian world building ground this science fiction novel in the near-future of 2026. While Koosis is careful to name all of the relevant technology (most notably MAP technology) but never explains it enough to provide the proper backdrop or urgency for the story.

A slow start and weak execution detract from this potentially intriguing premise. Short chapters will appeal to reluctant readers willing to play along with the often tedious plot. Koosis raises some interesting questions about cloning, depression, and suicide but her prose falls short of insightful answers. Appealing for fans of this specific sub-genre of science fiction.

Possible Pairings: Where She Went by Gayle Forman, Loss by Jackie Morse Kessler, The Cost of All Things by Maggie Lehrman, More Happy Than Not by Adam Silvera, Eternal Sunshine of the Spotless Mind

*A more condensed version of this review appeared in School Library Journal from which it can be seen on various sites online.*