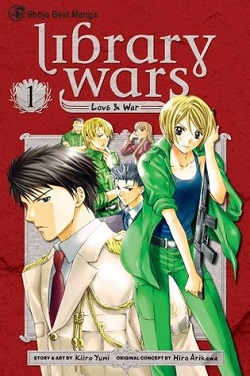 Library Wars: Love & War by Kiiro Yumi (based on the novels by Hiro Arikawa, translated by Kinami Watabe). Find it on Bookshop.

The series follows Iku Kasahara as she joins the Library Defense Force in near-future Japan. The LDF is a militant group comprised of librarians and soldiers who work together to fight the forced censorship of the Media Betterment Committee through any means necessary.

Iku has dreamed of joining the LDF since one of its soldiers stepped in to save her favorite book from being confiscated–something Iku could not do herself as a mere schoolgirl.

Inspired by the shining example of her so-called prince, Iku is determined to become the best LDF operative that she can. Iku’s dedication is challenged when she butts heads repeatedly with Instructor Dojo. While he is competent and can teach Iku a lot, he also seems to have it in for her. Will Iku survive training? Will Dojo ever warm up to her? Will Iku ever learn the true identity of her prince?

All of these questions and more are answered over the course of this fifteen volume manga series.

Library Wars: Love & War is far and away my favorite manga of all time.

I discovered this series in 2011 when I was in library school. Since then I faithfully read every volume as they came out and became available at my library. It was bittersweet when I read the final installment this summer and realized the series was truly over.

Because of the serialized nature of mangas, this series is a great choice to binge. I devoured these volumes and even though I just finished the series, I’m already thinking about a re-read. Yumi’s artwork is expressive and humorous as Iku negotiates her fraught relationship with Dojo with the everyday rigors of life as an LDF agent.

Library Wars: Love & War is fast-paced and filled with action (and if I’m being honest with lots of flirting and romance too). The love-hate dynamic between Iku and Dojo is, of course, at the heart of this series and remains a driving force for most of the installments.

As a librarian, Library Wars: Love & War holds a special place in my heart (though I’m glad I don’t have any militant aspects to my current job!). Highly recommended for anyone who is bookish and looking to get into manga. A great choice for someone looking for a series with a set number of volumes too.