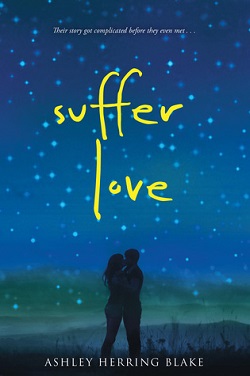 Hadley St. Clair’s family fell apart last year when she came home to a door covered in papers that revealed, again and again, that her father cheated on her mother. Everyone is telling Hadley that it’s time to move on. Her best  friend doesn’t recognize the girl Hadley has become. Her father is constantly hurt by Hadley’s anger. Her mother says she is trying to save their marriage but she can barely stand to be around Hadley or her father.

Sam Bennett hopes he can start over when he moves to a new town with his mother and younger sister after his parents’ bitter divorce. Sam is tired of drama and wary of relationships. All he wants to do is survive senior year and move on to college where he can be far away from his parents and their tacit disapproval.

Hadley and Sam are both hurting. They’re both feeling abandoned and maybe even betrayed by their parents’ choices. Neither of them expects to find comfort or connection with the other–especially Sam who knows exactly how ludicrous their mutual attraction really is–but then they find exactly that. And maybe more in Suffer Love (2016) by Ashley Herring Blake.

The story alternates first-person narration between Hadley and Sam whose distinct personalities come across clearly. The hurt and anger both characters feel comes across strongly throughout the novel making parts of this story a bit brutal.

Hadley and Sam’s connection, hinted at as mysterious in the jacket copy, is revealed early on as Sam realizes he knows exactly who Hadley is and her connection to his family. While this element adds tension to the plot, the real crux of the story is how Hadley and Sam connect to each other and their families.

Both Hadley and Sam are authentic characters and realistically flawed. Neither of them have made the best decisions in the last year and they are both suffering the aftermath of their families being laid to waste with one marriage ending in divorce and the other barely holding it together.

Sam and Hadley are both nuanced and well-developed characters, often making their friends and parents seem one-dimensional in comparison. This character-driven novel interestingly works Shakespeare (whose plays Sam and Hadley are studying in class) into the plot which does add an extra something to the story.

Suffer Love is a visceral and emotive contemporary novel. Recommended for readers looking for a quick and romantic read.

Possible Pairings: The Queen of Bright and Shiny Things by Ann Aguirre, Starfish by Akemi Dawn Bowman, Tell Me Three Things by Julie Buxbaum, Teach Me to Forget by Erica M. Chapman, The Revolution of Birdie Randolph by Brandy Colbert, If I Fix You by Abigail Johnson, This Raging Light by Estelle Laure, The Museum of Heartbreak by Meg Leder, Tweet Cute by Emma Lord, The Unexpected Everything by Morgan Matson, Foolish Hearts by Emma Mills, Damaged by Amy Reed, The Square Root of Summer by Harriet Reuter Hapgood, Kissing in America by Margo Rabb, Girl Against the Universe by Paula Stokes, P. S. I Like You by Kasie West