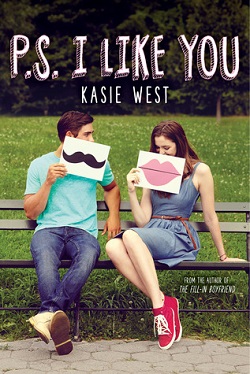 Lily and chemistry do not mix. So much so that her chemistry teacher limits Lily to one sheet of paper for notes during class. No notebook to write down song lyrics or create sketches. But chemistry is still chemistry (boring) so Lily soon begins writing some of her favorite song lyrics on her desk to pass the time.

When Lily gets to class the next day, someone has continued the lyrics. Soon Lily and her new pen pal are sharing favorite bands, secrets, and their innermost thoughts. The only problem is that Lily has no idea who is writing her letters.

As she tries to balance school, friends, and her responsibilities at home (not to mention her song writing ambitions and her crippling stage fright), Lily feels like she and her pen pal are getting closer. But it turns out pen pals (and, okay, crushes) can sometimes be hiding in plain sight in P. S. I Like You (2016) by Kasie West.

West delivers realistic dialogue and dynamic characters in her latest contemporary novel. While Lily often reads young (complete with snap judgements and impulsive decisions) she remains authentic for most of the story. Lily’s hectic home life and her musical aspirations make her a particularly sympathetic and interesting narrator.

Attentive readers will figure out the identity of Lily’s pen pal early in the story leading to some fun moments of confusion and mistaken identity as Lily makers her way toward the same conclusion. P. S. I Like You is a short and sweet romance sure to appeal to readers who enjoy characters with obvious chemistry (pun intended) and partly epistolary tales.

Possible Pairings: Suffer Love by Ashley Herring Blake, A Week of Mondays by Jessica Brody, Tell Me Three Things by Julie Buxbaum, Shuffle, Repeat by Jen Klein, The Romantics by Leah Konen, The Museum of Heartbreak by Meg Leder, This is What Happy Looks Like by Jennifer E. Smith