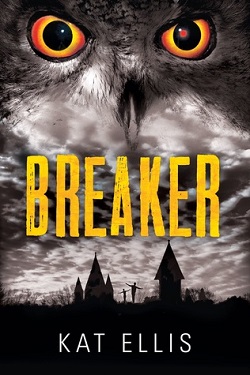 Naomi doesn’t want to board at Killdeer Academy but she can’t stay with her grandparents now that her grandmother has so much to do taking care of Naomi’s grandfather as his Alzheimer’s progresses.

Kyle hopes to be able to remake himself at Killdeer Academy with a new last name and a determination to forget all about his serial killer father. His mother’s decision that Kyle should board is a surprise. But he’s dealt with worse.

Kyle expects to have a completely blank slate at the Academy. The only problem is that he recognizes Naomi immediately. She was the daughter of his father’s last victim. Kyle wants to stay away from Naomi but he isn’t sure how to ignore when she seems to actually want to be his friend–and maybe even more. When people start dying on campus both Naomi and Kyle will have to confront their pasts to stop the murders in Breaker (2016) by Kat Ellis.

The book alternates first person narration between Kyle and Naomi which makes both protagonists well-rounded. While other characters factor into the story in crucial ways, they remain decidedly secondary to Kyle and Naomi and are consequently somewhat less developed. Excerpts from ephemera related to Kyle’s father further complicate the story.

In a departure from her debut mystery fantasy, Blackfin Sky, Ellis delivers a much darker story here. Kyle is haunted by his father’s legacy as a serial killer, terrified that the stigma will cling to him forever and the thought that he could have turned out like his father. Naomi saw her mother’s murder and has spent the intervening years doing her best to not think about her mother at all to avoid the pain of that traumatic loss.

Kyle and Naomi are a completely unlikely pair but their chemistry in Breaker, not to mention their draw to each other is undeniable in this fast-paced thriller that is sure to appeal to fans of the genre. Breaker is a creepy and atmospheric story filled with choice details that bring Killdeer Academy to life in all of its eerie and dilapidated glory.

Possible Pairings: The Leaving by Tara Altebrando, With Malice by Eileen Cook, The Devil You Know by Trish Doller, The Night She Disappeared by April Henry, I Hunt Killers by Barry Lyga, The Book of Blood and Shadow by Robin Wasserman

You can also read my interview with Kat about Breaker!