“If you can’t be unafraid, be afraid and happy.” 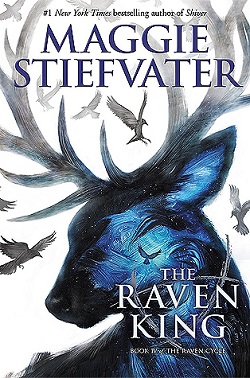 Gansey has been searching for his lost king for years. In the years after he died–and was brought back–Gansey is certain that finding Glendower is his destiny. Surely, such a quest is what he was saved to complete?

Along the way Gansey’s unlikely friends have joined him in the hunt: Ronan, a dreamer inextricably linked to the ley line and the magic of Cabeswater; Adam, who bargained away his autonomy to become Cabeswater’s magician; Noah, whose grip on his life is becoming more and more tenuous the longer he is dead; and Blue, the girl from a psychic family who is not psychic at all, the girl who is going to kill her true love with a kiss, the girl who loves Gansey.

For months now, Gansey and the rest have been creeping closer. Glendower is almost found. Dreams and nightmares are building. A storm is coming. Every quest has an end, but this time no one knows what they will find when it’s over in The Raven King (2016) by Maggie Stiefvater.

The Raven King is the final book in Stiefvater’s widely acclaimed Raven Boys Cycle. It is preceded by The Raven Boys, The Dream Thieves, and Blue Lily, Lily Blue. This book should definitely be read in order with the other books in the series and (obviously) has spoilers for the earlier books.

It’s always bittersweet to come to the end of a much-loved series. With characters like Blue and Gansey and Ronan and Adam, it’s especially hard to say goodbye. But The Raven King is the conclusion these characters deserve–possibly even the one they have earned–after everything they’ve survived and accomplished in the rest of the series.

Like the rest of this series, The Raven King is extremely well done with flawless writing and a tight plot. Although some rare readers might find the ending a bit too perfect, this book is also an excellent example of what you have to always trust the author.

The Raven King is a story where all of the characters are hurtling towards very specific goals and destinations only to realize that in the end the destination wasn’t the point at all–it was the journey, it was the people met along the way (particularly when it comes to the new characters introduced here). A completely satisfying conclusion to a stunning and evocative series.

Possible Pairings: Loop by Karen Akins, The Hazel Wood by Melissa Albert, Unspoken by Sarah Rees Brennan, Blackfin Sky by Kat Ellis, The Accident Season by Moïra Fowley-Doyle, Clarity by Kim Harrington, Fire and Hemlock by Diana Wynne Jones, Once a Witch by Carolyn MacCullough, The Left-Handed Booksellers of London by Garth Nix, It Wasn’t Always Like This by Joy Preble, The Shadow Society by Marie Rutkoski, The Price Guide to the Occult by Leslye Walton, Extraordinary by Nancy Werlin, Pivot Point by Kasie West, The Replacement by Brenna Yovanoff

2 thoughts on “The Raven King: A Review”