“We could look at the side of wonder.” 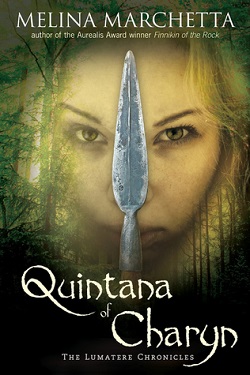 Froi was left for dead on the mountaintops of Charyn, taken to his uncle–a gifted physician. He has lost Quintana. He has lost Gargarin and Lirah.

Quintana of Charyn is alone and in hiding. She might be the curse breaker, but first she will have to survive long enough to give birth to the new heir.

In Lumatere, the Charyn threat is growing. Lucian of the Monts is uncertain of how to deal with his unwanted neighbors across the valley. Isaboe wants to erase the royal line responsible for the days of the unspeakable and the murders of her family. Finnikin wants to find Froi before it’s too late. But in their months apart, both young men have changed.

Two countries torn apart by grief and rage will have to find common ground if either of them hopes to heal in Quintana of Charyn (2013) by Melina Marchetta.

Quintana of Charyn is the final book in Melina Marchetta’s Chronicles of Lumatere which begins with Finninkin of the Rock and Froi of the Exiles.

Quintana of Charyn picks up soon after the brutal events of Froi of the Exiles. Everything is still a mess. The characters are all separated. The outlook is bleak.

It’s difficult to talk about too much of the plot but suffice to say that Quintana of Charyn gives these characters the space and the ending that they deserve. Through careful writing and artful plotting, Marchetta subtly shifts her characters and tone. After the harrowing experiences of book two, this conclusion to her epic fantasy trilogy reads like a soothing balm.

It’s a testament to the strength of the writing and the intricacy of this series that absolutely everything comes together here. Marchetta uses the fantasy setting to explore larger issues of forgiveness and love as well as grieving and rebirth in this powerful novel.

Quintana of Charyn is a must read for fans of the first two books in the series. Readers looking for their next sweeping fantasy series should definitely start this series at the beginning. Highly recommended.

Possible Pairings: Three Dark Crowns by Kendare Blake, Graceling by Kristin Cashore, The Yiddish Policeman’s Union by Michael Chabon, Exquisite Captive by Heather Demetrios, Incarceron by Catherine Fisher, The Lost Sun by Tessa Gratton, Princess of Thorns by Stacey Jay, The Dispossessed by Ursula K. Le Guin, The Orphan Queen by Jodi Meadows, The Tower at Stony Wood by Patricia A. McKillip, The Outlaws of Sherwood by Robin McKinley, Snow Like Ashes by Sara Raasch, Dreams Lie Beneath by Rebecca Ross, The Winner’s Curse by Marie Rutkoski, Gulliver’s Travels by Jonathan Swift, The Last of the High Kings by Kate Thompson, Lord of the Rings by J. R. R. Tolkien, The Queen of Attolia by Megan Whalen Turner