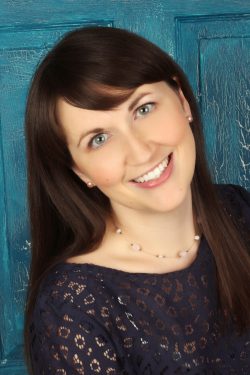 MP: Break Me Like a Promise is the second book in your Once Upon a Crime Family series? What was the specific inspiration for this story? What drew you to The Frog Prince as source material?

TS: When I decided to tell Maggie’s story in Break Me Like a Promise, I knew right away that it was going to be about the mismatch between the way the world perceived Maggie (So feisty! So Strong! Unbreakable!) and the way she was currently feeling (very, very broken!). It’s not that Maggie isn’t strong, even in her broken state, it’s that no one around her is willing to give her space or time to heal or recover from the traumas she’s experienced. They’re all so impatient for her to ‘bounce back’ and don’t even want to acknowledge that what she’s been through may have irreversibly changed her.

Pairing Maggie’s story with The Frog Prince felt natural to me. That fairy tale is all about a promise the princess never has any intention of keeping—a promise she’s backed into and then has held over her head. In a similar way Maggie feels cornered and blackmailed into making and keeping the deal she arranged with Alex. Though she has no idea of the implications and complications when she first made the promise.

MP: After reading both books in this series, it’s pretty clear that both books have their individual, contained stories while also moving along a larger plot that spans the series. How much did you know about the arc of this series when you started writing it? Did you always know book two would belong to Maggie?

TS: When I began writing the Once Upon a Crime Family books I didn’t intend for them to be a series at all. I thought Hold Me Like a Breath would be a stand alone and planned and began to write it as such. This changed the second Magnolia Grace Vickers stepped onto the pages of Penny’s story. I immediately had her voice in my head—and there was so much more to her and about her than fit in that narrative. Maggie is such a larger-than-life person for Penny, it was really fun to swap perspectives and get to narrate from inside Maggie’s experience. Since so many other threads within the crimes families and world couldn’t be tied up neatly in book one, it was great to have a chance to explore them through her story.

MP: Break Me Like a Promise has a mostly new cast of characters including Alex, a computer expert in need of a kidney transplant. What kind of research went into getting details about Alex’s health and his computer expertise right in the story?

TS: Alex was a really complicated character to write and I hope I did him justice. For his computer expertise I sent lots of questions to a writer friend whose husband is currently getting his PhD in something complicated and technical. Our emails were pathetically ignorant (on my side) and impressively complicated (his side) — we found a great middle ground when his wife ended up drafting his responses in dialogue form. For Alex’s kidney disease I turned to message boards/forums, doctors, parents of patients, and medical research journals. This is the third time I’ve tackled a medical condition in a novel (also Send Me a Sign and Hold Me Like a Breath) but it never gets easier to hear stories of other people’s pain. I didn’t ever intentionally set out to focus so frequently on medical issues (um, see the next question!) but there’s such an intense pressure and responsibility to get it right and make sure that patients dealing with these conditions find themselves respectfully and accurately depicted. Whenever I hear from a reader that they’ve identified with or related to what one of my characters is going through, it’s the best reward. I’m so touched and grateful that they’ve shared with me. I think it is so important that everyone should be able to find themselves represented in a book.

MP: You’ve mentioned before that you have a blood phobia which is a trait that you also gave to Maggie in this novel. What was it like to include something that you are so personally familiar with? Was it hard getting to that place with Maggie while writing?

TS: Ha! Gifting Maggie with my blood phobia was the ONLY way I could get through this book, which feels pretty ironic since Hold Me Like a Breath had murders and blood tests and injuries too. But the research and videos for dialysis hit right at my phobia trigger points. There were several times I had to stop researching to lie down with a wet cloth (yes, I DO know that makes me ridiculous!) The thing was, blood phobia is also such an absurd thing for Maggie to have. She’s the heir of a crime family that traffics in body parts. A person who prides herself on being so mentally tough. This phobia is such an achilles heel for her—and makes her incredibly self-conscious. Once I thought through that angle, I was doubly delighted to pass my fear along to Maggie: it works for my convenience, but also to amp the plot tension. Win!

MP: One of the neat things about Break Me Like a Promise is that it has a very different structure from Hold Me Like a Breath. We still have some romance and humor but there is also a sense of urgency with a tighter plot set over a shorter span of time. As a writer, how did you go about pacing this story and keeping up the tension?

TS: The majority of Break Me Like a Promise takes place on Maggie’s ranch in Texas. With such a small setting, I knew the plotting and pacing needed to move faster or the book would start to feel claustrophobic and stagnant. Hold Me Like a Breath has murders to drive the plot forward—but the ticking clock in Break Me Like a Promise is no less urgent—political deadlines and Alex’s health. All of the lies and truths Maggie is juggling can only stay hidden for so long, and knowing that everything is going to come crashing down lends another layer of tension as well. I used a calendar and a lot of color coding to do the planning on this book—keeping in mind the timeline and way each plot point needed to push forward made it easier to makes sure that the different threads built on each other and propelled everything forward.

(this is what remained of the calendar by the end of revisions. I’d already begun erasing aspects off as I resolved them…)

MP: Maggie is a no-nonsense character with a very unique voice and a personal outlook that changes throughout the novel as she learns more about herself and the Family Business. I loved this book and I loved reading about Maggie’s strength and resilience as she moves forward after book one.  Was her development something that had to be plotted out? Did it come more naturally as the story progressed?

TS: I’m so delighted that you enjoyed Maggie and identified so strongly with her. As a character Maggie’s voice was so clear in my head—but it was also so hard to spend time in hers because of all the pain she was in. You’re so right to call her resilient, but that resilience comes at such a personal cost to Maggie, and being in that headspace — let’s just say, I cried more writing this book than all my others combined! I spent quite awhile mapping out her arc. While I don’t outline, I knew where I wanted her to start and where I wanted her to end up. Figuring out the exact trajectory that would get her there—complete with complications, setbacks, impossible odds, and her feisty spirit—was the work of lots of revision and incredible patience and insight on the part of my editors and critique partners.

MP: Did you have a favorite character to write in Break Me Like a Promise? Is there any character you are particularly excited for readers to meet?

TS: I’m going to answer this as *besides Maggie*, because I’m pretty sure my love for her came through in my last answer. But on top of Magnolia Grace, there are so many secondary characters that I’m excited for readers to meet. James, Lupe, and Alex are three that first come to mind, but Maggie’s parents are also some of my favorite characters I’ve written. It was also really entertaining to write Penny from an outsider’s perspective — so it’ll be fun for readers of book 1 to see that too. Ugh, but if you’re going to make me pick ONE character, I’ll answer James. He’s grown up in the Vickers Family with Maggie and the complicated way this has corroded and strengthened and undermined their friendship was really challenging and intense to craft. Both Maggie and James are so aware of how much they’ve hurt each other in their efforts to get ahead within the Family, but both really cherish the days before Family competition crushed their friendship. The dynamic between Maggie and James as they tried to untangle the ways they’ve betrayed and manipulated each other so that they can get back to that place of loyalty and trust was one of the hardest parts of the book. He was a character that grew on me unexpectedly, and I’m excited for readers to meet him.

Thanks again to Tiffany for a great interview.

You can see more about Tiffany and her books on her website.

You can also read my review of Hold Me Like a Breath and Break Me Like a Promise here on the blog.

1 thought on “Author Interview: Tiffany Schmidt on Break Me Like a Promise”