I first saw Aimee at one of the first Teen Author Reading Nights held at Jefferson Market in 2008. She was reading from and discussing her then-newest title The Year My Sister Got Lucky. I read the book soon after and started following Aimee on Twitter soon after. Her follow-up book, Sea Change, is still the only mermaid book I unequivocally love. Needless to say I’ve been waiting eagerly for a new novel from Aimee. I’m happy to report that Two Summers far exceeded my expectations and even more excited to have Aimee answering some questions about it today on the blog.

Miss Print (MP): Can you tell me a bit about your path as a writer? How did you get to this point?

Aimee Friedman (AF): I wrote my first story at age five and right away knew that this was what I wanted to do. Reading and writing were the lifeblood of my childhood and adolescence. When I graduated from college, I began working as an editorial assistant and always wrote on the side. And in 2005, my lifelong dream came true–my first YA novel, SOUTH BEACH, was published! The moment I saw it in a bookstore, I almost fainted. Then I made my parents take like twenty pictures. Since then, it’s been eleven years (eep!) of stops and starts, a few more books, some bumps in the road, adventures…and I wouldn’t trade the writing life for anything.

MP: What was the inspiration for Two Summers?

AF: I spent a magical summer living in the South of France when I was 19, and I always wanted to write about it in some way.  But I also wanted to write a book about choices, and “what-if”s. And I love summer, the season, so much that I knew I wanted to explore more than one. So I started tinkering with those ideas…and the rest is (Two Summers) history.

MP: This book is has a prologue and epilogue framing the parts of the story which alternate between Summer’s two lives–one in France and one in her hometown. Despite the obvious differences, some key details and moments turn up in both narratives. How did you go about plotting this story and keeping track of everything?

AF: There’s a reason this book took me about three years to write! It was essentially like writing two novels at the same time, and it involved a lot of outlining and head-scratching and long talks with my editor when it came to figuring out the logistics. I ended up creating a fictional calendar for the story, and basically filled it out with what happened on each day, both in France and in America (also keeping note of time zone difference!). Once I had that in place, it was easier to go forth and write out all the beats.

MP: In Two Summers Summer faces a pivotal decision that can lead to two very different summer vacations for her. Did you always know this story would explore dual lives?

AF: Yes! I have long been obsessed with the idea of parallel lives–the notion that one tiny choice can split off into infinite possibilities. (I love the movie Sliding Doors, though I haven’t seen it in years and very deliberately did not watch it while writing Two Summers, so as not to be overtly influenced or thrown off track). I love the work of Brian Greene, a physicist who wrote The Elegant Universe and The Hidden Reality, among other books, that explore in really accessible ways the idea that there are endless universes out there. So cool.

I also really believe that all of us have “two sides”–or more. Different versions of ourselves that we share with different people; ways we are when we are alone, ways we are when we travel versus stay at home. I wanted the book to touch on that as well.

MP: It seems like everyone has pivotal moments like Summer’s all the time. (“What if I didn’t have that internship in high school?” “What if I had sent that email?” And so on.) Do you have your own pivotal moment you’d want to share? Do you think your life now would be different if you had taken the opposite path?

AF: Well, any moment can be a pivotal moment–that’s the thing; we never really know! Sometimes those moments are obvious–if, for instance, I went to law school after college, something one of my professors strongly recommended I do, my life probably would have taken a very different path. Or would it have?  And then there are those funny, tiny moments of choice; the other day, I decided to walk somewhere instead of taking the subway and I ended up running into a dear old friend whom I’d been hoping to reconnect with on the street. Fate, or randomness?

MP: Two Summers features two (possibly of many more!) distinct paths Summer could have taken. Do you seen one as more “real” by the end of the story? Was one more fun (or more challenging) to write?

AF: I don’t want to say, for fear of spoilers! This one is up to the readers to decide. In terms of writing the dual narratives, they both presented their own rewards and challenges; both settings were fun to “live in” but I also wanted to make sure they both felt authentic and true.

MP: If you were in Summer’s shoes, would you have answered your phone?

AF: No! I never answer my phone when it’s an unknown number. I usually just stare down at the screen like “Who ARE you?” and let it go to voicemail.

MP: Did you have a favorite scene to write in Two Summers or a scene you are excited for readers to discover?

AF: I loved writing the moment when Summer first gets to France. It took me back to when I lived in France, those  feelings of discovery and excitement and disorientation.

MP: Can you share anything about your next project?

AF: It’s in the very early stages right now–sketching down ideas, talking it over with some trusted readers, etc. I’m superstitious and don’t want to jinx it by saying more!

AF: Read! Read what you love, read across genres, read to feel inspired and overwhelmed and inspired again. Wander around bookstores. Read Bird by Bird by Anne Lammot and On Writing by Stephen King. Those are lifesavers! Write down scraps of ideas. Then seize on the scrap that most captures your imagination and expand it. And try to turn off that internal editor whispering in your ear that “it’s not good enough.” It’s hard, but if you can turn off that voice and just get the words down, it will feel awesome. Have a trusted beta reader or two, someone there to push you along and give you criticism and praise as needed. Go, go, go!

Thanks again to Aimee for this awesome interview.

Be sure to enter my Two Summers giveaway too!

You can see more about Aimee and her books on her website.

You can also check out my review of Two Summers.

Two Summers was one of my most anticipated 2016 releases and, happily, it completely lived up to my high expectations. Thanks to Scholastic, I am hosting a giveaway for FIVE advance copies of Two Summers and one grand prize of a Two Summers travel bag. 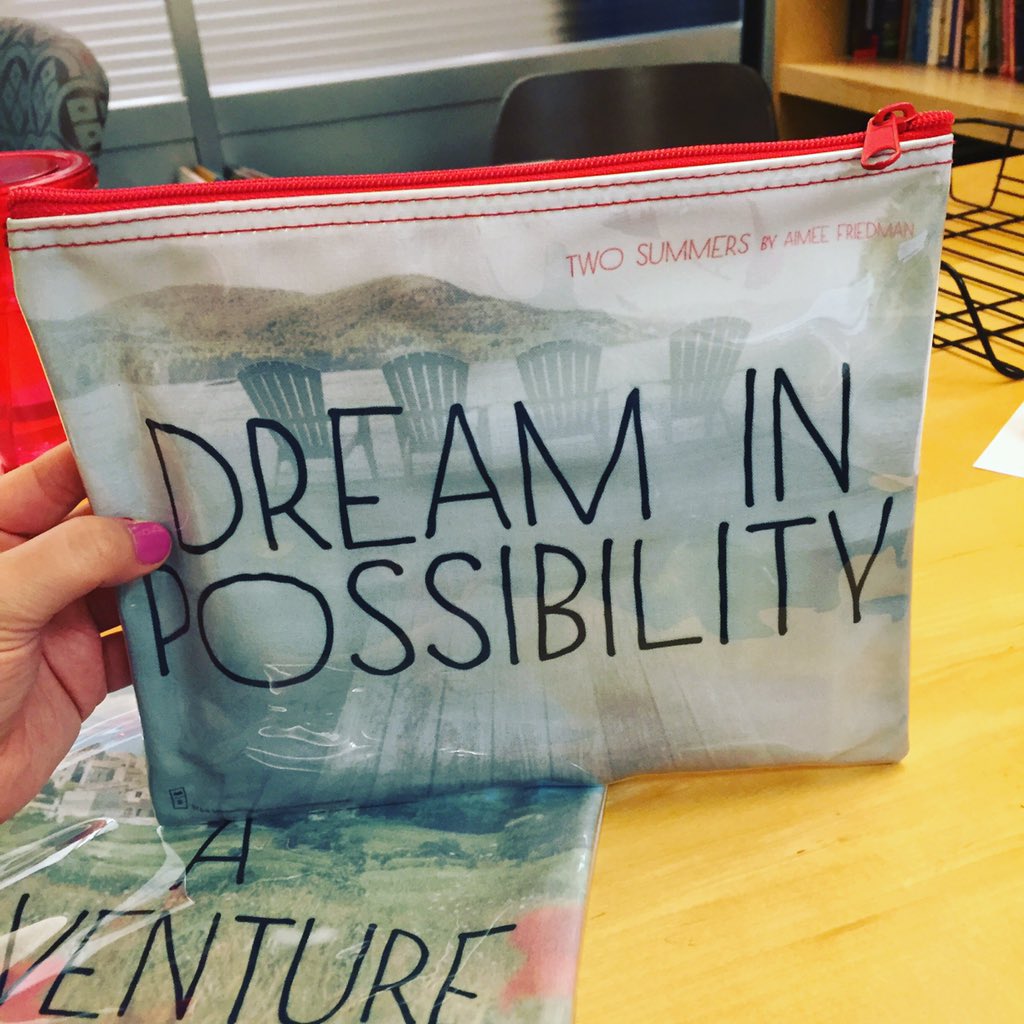 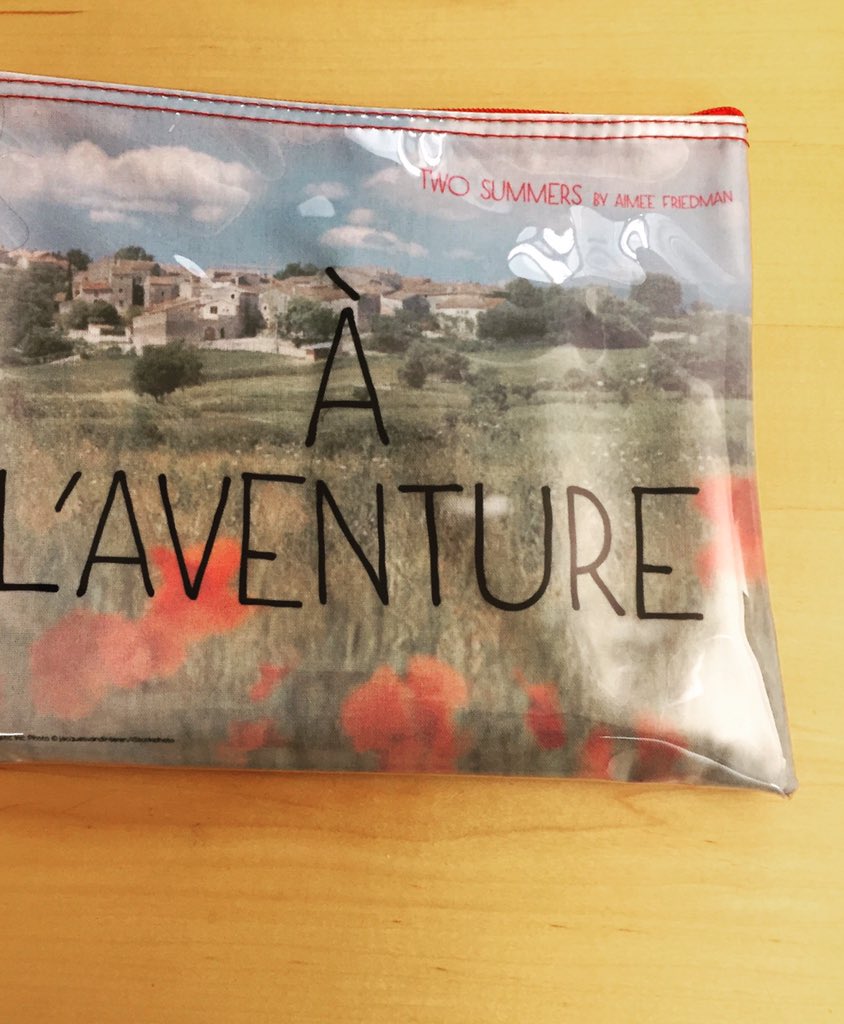 Giveaway is open to any readers over the age of 13. US only. There will be six winners total (one for the bag and one each for the five ARCs).

Giveaway will run from midnight April 4 through April 9.

Winners will be notified April 10.

If I don’t hear back from any winner by April 11 I will pick a new winner from the entry pool.

I’m running the giveaway through a Rafflecopter giveaway. Details on how to enter can be found by clicking “enter” above or clicking the photos!