“So many speeches to give.

“So many articles to write.

“So many minds to change.” 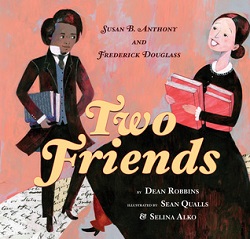 Although Two Friends is a fictionalized account, it is based on a very real friendship. Douglass and Anthony became friends in the mid-1800s in Rochester, New York. Throughout her life Anthony advocated for women’s rights–including the right to vote. Douglass spent his life fighting for African American rights. The pair also supported each others’ causes and often made appearances together.

Robbins uses the frame of one of Douglass and Anthony’s visits to present a larger picture of their efforts to gain equal rights and fight for their respective causes in Two Friends. The story also highlights key points in both of their lives that led to their dedication to speak out for freedom and equality.

The text throughout Two Friends is presented in short sentences or very small paragraphs making this a great choice to read-aloud. The words are also spread out across the page so readers are never faced with daunting chunks of text. At the end of the book, Robbins talks slightly more in depth about Anthony and and Douglass in a page-long author’s not. A bibliography is also included along with actual photographs of both Douglass and Anthony.

The illustrations by husband-and-wife team Qualls and Alko are gorgeous and add a nice dimension to the story with some additional text elements added into some of the collages. The artwork stays true to Anthony and Douglass’ likenesses while also maintaining the style that Qualls and Alko developed in their first illustrative collaboration, The Case for Loving. Pops of bright color serve as a nice contrast against some of the darker winter backdrops in some of the spreads.

It is worth noting that some of the historical context for life as a woman and life a freed slave are simplified. For instance the text notes that Susan’s mother can’t go to college or own a house but it stops short of saying that women were considered property at this point in history. Two Friends also states that slaves had to do everything the master said but stops short of explaining that slaves were property and bought and sold by owners. Are either of these things something that should feature in a picture book? It’s hard to say. But the absence–even in the author’s note at the end of the book–seems glaring.

As with many picture books, Two Friends adopts a certain symmetry between Douglass and Anthony’s lives. Because of their similar causes, these similarities make sense within the context of the narrative.

Two Friends is a solid picture book introduction to Susan B. Anthony and Frederick Douglass as historical figures and can serve as an excellent entry point to non-fiction/biography titles on both. Stunning artwork makes Two Friends even better. A great addition to any collection.