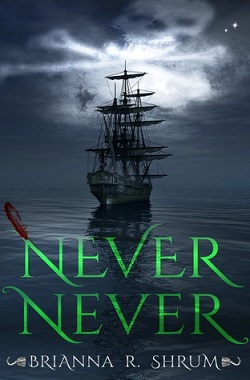 James Hook is a boy who is desperate to grow up.

It is only in his sleep, and the brief moments when he forgets himself, that James indulges his childish dreams of captaining the fierce pirate ship The Spanish Main.The rest of the time, James eagerly looks forward to the day he will be a man and all of the new responsibilities it will involve.

When he meets a strange boy named Peter Pan in Kensington Gardens, James wonders if perhaps he should spend more time as a child. So strong is Peter’s pull that James agrees to go with Peter to Neverland–at least until the end of his holiday when he will return to London and his future at Eton.

Neverland is not what James imagined, filled with all manner of strange and horrible things from the dreams of other Lost Boys. Worse, Peter refuses to bring James home.

Disillusioned and alone, James Hook soon grows up. He knows who he might have been in London, but when that path is lost to him, he chooses to make himself into the feared pirate captain of his dreams–the pirate who might be able to exact revenge against the Pan in Never Never (2015) by Brianna Shrum.

Never Never is Shrum’s first novel. It is also a standalone retelling of Peter Pan that begins with Hook’s arrival in Neverland as a Lost Boy.

The thing to remember about Peter Pan, in any form, is that the story is incredibly problematic when viewed through a modern lens. Peter is as vicious as he is careless. Tiger Lily and her tribe make no sense in the context of Neverland being used to meet the whims of both Peter and Barrie. The Indians in Neverland are also portrayed badly with tired and often inaccurate stereotypes about Indians. The issues surrounding Wendy are numerous as well although less relevant in the context of this novel.

The most interesting part of Never Never is, unsurprisingly, Hook himself. The interplay between who Hook is for most of the story (a good young man dealt a very bad hand) and who he chooses to present to Neverland (a villainous pirate) is an interesting one. This duality also leads to some thoughtful meditations on what it means when childhood fantasies are too gruesome–or too grim–to survive into adulthood. The idea of Hook getting older in Neverland without any of the inherent growth and development is also an interesting one. Although James Hook becomes a man called Captain Hook by the end of the novel, he is still very much an angry boy looking for his own version of justice.

Never Never is very character driven with most of the novel being very introspective as James makes sense of various catastrophes and slights. This focus works well set against the dreamlike and often sinister Neverland that Shrum has created. It also makes the pacing of the novel quite slow.

Tiger Lily is always a troublesome part of Peter Pan. That is especially true in Never Never where she is the girl who has James Hook’s heart despite belonging to Peter Pan. The awkward love triangle is made worse by the fact that Tiger Lily remains little more than an exotic temptress. She is further diminished by her complete lack of agency throughout the novel as she is constantly reacting to either James or Peter. (Even Tiger Lily’s choice to grow up is predicated on making herself closer to James’ age.)

While Never Never is a promising debut, it fails to add anything new to the world of Peter Pan instead sticking very close to the source material despite being written from Hook’s perspective. Being a story about a villain, it’s easy to guess how Never Never will end. Given the amount of time readers spend with Captain James Hook it is also easy to guess that this ending will be largely unsatisfying for many readers.

Possible Pairings: The Wrath and the Dawn by Renee Ahdieh, Tiger Lily by Jodi Lynn Anderson, Six of Crows by Leigh Bardugo, Peter Pan by J. M. Barrie, The Coldest Girl in Coldtown by Holly Black, Blackhearts by Nicole Castroman, The Accident Season by Moïra Fowley-Doyle, The Girl From Everywhere by Heidi Heilig, Winterspell by Claire Legrand, Unhooked by Lisa Maxwell, Lock & Mori by Heather W. Petty, Wendy Darling: Stars by Colleen Oakes, Hold Me Like a Breath by Tiffany Schmidt, Vicious by V. E. Schwab, Everland by Wendy Spinale

3 thoughts on “Never Never: A Review”