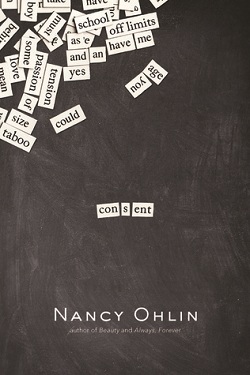 Between all of the lies she tells at school about her non-existent piano teacher and her supposedly okay home life, Beatrice Kim has a lot of secrets even before starting her senior year at Andrew Jackson High School.

Then Bea meets her music history teacher. Mr. Rossi is young, good-looking, and completely believes in Bea’s potential as a professional pianist–something Bea hasn’t ever allowed herself to consider.

When their shared passion for music turns into something else, Bea and Rossi begin a sexual relationship that could ruin them both. Bea thinks she knows what she is doing and what she wants. She thinks Rossi understands her and loves her. But with the threat of discovery looming, Bea will have to confront uncomfortable truths about herself and her relationship with Rossi in Consent (2015) by Nancy Ohlin.

Consent delivers two stories in one slim volume. One, reminiscent of Sara Zarr’s The Lucy Variations, explores how Bea lost her love for the piano and how she can reclaim it; the other is an often uncomfortable examination of a relationship that never should have happened.

Despite the problems Bea hints at in her home life and the lies she tells, everything comes very easily to Bea in Consent. She is at the top of her class despite having no real interest in college. She is a piano prodigy with perfect pitch although she has never had formal lessons. She is also, conveniently, at a recently rebranded  “Campus for Baccalaureate and Performing Arts” despite having a nearly pathological desire to avoid the piano at the beginning of the novel. Readers who can get past these contrivances will be rewarded with a layered and thoughtful contemporary novel.

The push and pull between what is perceived and what is true throughout Consent adds another dimension to Bea’s often unreliable first person narration as readers, and Bea herself, contemplate Rossi’s agenda.  Despite some heavy-handed moments, Ohlin delivers an open-ended novel ripe for discussion as readers follow the plot’s twists and turns.

Possible Pairings: Love and Other Perishable Items by Laura Buzo, With Malice by Eileen Cook, The Graces by Laure Eve, The Midnight Dress by Karen Foxlee, Don’t You Trust Me? by Patrice Kindl, The Truth Commission by Susan Juby, Boy Toy by Barry Lyga, Teach Me by R. A. Nelson, Suicide Notes from Beautiful Girls by Lynn Weingarten, The Lucy Variations by Sara Zarr

You can also read my review with Nancy Ohlin starting November 12.