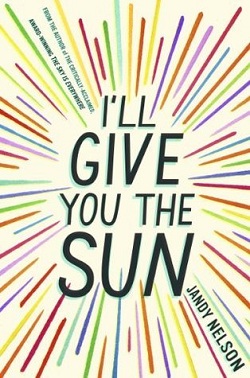 At thirteen, twins Noah and Jude are close. Their family is whole. Everything seems perfect. From a distance. Close up it’s easy to see that Jude is making bad choices that are pushing her toward a serious fall while Noah is struggling just to keep himself together under the pressure of fitting in with the painfully normal world. Art has always been enough to get Noah through. When he falls hard for the beautiful boy next door, he isn’t sure anything–not even painting–will be enough to make things right again.

At sixteen the twins are barely speaking and nothing is perfect anymore. Noah hides his hurt behind a facade of normalcy that seems to fool everyone but Jude. Jude, meanwhile, is not-so-quietly falling apart trapped on a path she never expected and is not sure she wants.

Both Noah and Jude are haunted by old ghosts and past mistakes. With the help of a curmudgeonly artist and a spectacularly messed-up boy, Jude thinks she can put the pieces of her family back together. Except she only has half of the pieces. It will take both Jude and Noah, together, to make things right in I’ll Give You the Sun (2014) by Jandy Nelson.

I’ll Give You the Sun is Nelson’s second novel. It is the winner of the 2015 Printz Award and the 2015 Stonewall Award.

Nelson delivers one hell of a story in her sophomore novel. I’ll Give You the Sun presents two stories simultaneously in alternating sections (no chapter breaks). Noah begins the novel with his story “The Invisible Museum” when the twins are 13 and on the cusp of some major changes for themselves and their family. Jude handles the latter of of the novel’s plot in “The History of Luck” when the twins are 16 and deeply troubled.

I’ll Give You the Sun has mystery, romance and elements of magic realism. The prose is imbued with an ode to the power of art and creation as well as some deeply powerful ideas about feminism.

The novel moves along with clever intersections between Jude and Noah’s stories. Both Noah and Jude have voices that are breezy and approachable in a way that draws readers immediately into their stories and their lives. Although the two characters often sound very similar in their narrations, there is a fair argument that the similarities are intentional since they are twins. It’s more difficult to explain Noah’s often literary and lyrical voice when he is only thirteen for much of the narrative–something that is balanced out with behavior (from both twins at that age) that is often painfully thoughtless or selfish.

This book isn’t always easy to read. The end of Noah’s story leaves both twins damaged and reeling from a variety of catastrophes. In Jude’s section, they are both hurting and struggling to survive without much hope for anything more until Jude decides to take a chance. I’ll Give You the Sun is at its strongest when these two characters realize they have to take action if they want to thrive.

Nelson’s writing is spectacular making I’ll Give You the Sun a vibrant story about family, recovery, art and love. Not to be missed.

Possible Pairings: The Darkest Part of the Forest by Holly Black, Starfish by Akemi Dawn Bowman, The Game of Love and Death by Martha Brockenbrough, Tell Me Three Things by Julie Buxbaum, Love and Other Perishable Items by Laura Buzo, A Little Wanting Song by Cath Crowley, The Last True Poets of the Sea by Julia Drake, The Midnight Dress by Karen Foxlee, Life by Committee by Corey Ann Haydu, Magonia by Maria Dahvana Headley, Alice, I Think by Susan Juby, Undercover by Beth Kephart, The Last Time We Were Us by Leah Konen, The Start of Me and You by Emery Lord, Jellicoe Road by Melina Marchetta, Now a Major Motion Picture by Cori McCarthy, The Weight of Feathers by Anne-Marie McLemore, The Summer of Chasing Mermaids by Sarah Ockler, The Astonishing Color of After by Emily X.R. Pan, Cures for Heartbreak by Margo Rabb, Damaged by Amy Reed, A Map of the Known World by Lisa Ann Sandell, Black Dove, White Raven by Elizabeth Wein, Six Impossible Things by Fiona Wood, The Sun is Also a Star by Nicola Yoon