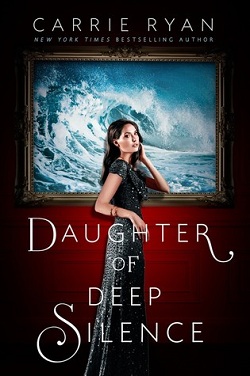 Three people survived when the luxury yacht Persephone sank. Two of them are lying.

Frances Mace knows the truth but at just fourteen, with everyone who ever knew her gone, Frances has no way to contradict the lies being told by the other survivors.

Four years after the disaster, everything about Frances is a lie. Everything about her is a tool meant to help her exact revenge. Frances will stop at nothing to get justice for the victims of the Persephone even if it means giving up the boy she loves and sacrificing her own identity in Daughter of Deep Silence (2015) by Carrie Ryan.

Daughter of Deep Silence is a standalone contemporary thriller reminiscent of the TV show Revenge.

Evocative language and vivid descriptions bring the novel’s South Carolina settings and Frances’ horror-stricken memories of the Persephone to life. Ryan pulls no punches in describing the hardships Frances faced when the Persephone sank nor does she shy away from exploring the post-traumatic stress that obviously plagues Frances four years later.

With rich characters and lavish settings, this story is a classic revenge story with added depth for the main character. Frances’ life is complicated and her sacrifices in pursuing revenge are almost too numerous to count.

Although Frances is a vibrant and strong character, her singular focus and strong personality only serve to underscore the fact that the rest of the characters are thinly drawn. (Shepherd in particularly felt like a prop for most of the story meant to act as a placeholder for Frances’ conscience.)

While Frances’ revenge plot is well-planned, the logic behind it (as well as the truth behind the sinking of the Persephone) both are largely anti-climactic after a book’s worth of build up. Readers seeking a story with more substance and stronger characterization will be left wanting more from this novel.

Daughter of Deep Silence will appeal to readers looking for an edgy, fast-paced revenge story that has its smart moments.

Possible Pairings: The Leaving by Tara Altebrando, Six of Crows by Leigh Bardugo, Dial Em for Murder by Marni Bates, Vengeance Road by Erin Bowman, Foul is Fair by Hannah Capin, All Fall Down by Ally Carter,  With Malice by Eileen Cook, The Devil You Know by Trish Doller, Charlie, Presumed Dead by Anne Heltzel, We Were Liars by E. Lockhart, Pretending to Be Erica by Michelle Painchaud, Lock & Mori by Heather W. Petty, I Am Princess X by Cherie Priest, Hold Me Like a Breath by Tiffany Schmidt, The Deceivers by Kristen Simmons, Suicide Notes From Beautiful Girls by Lynn Weingarten, Revenge (TV series)

3 thoughts on “Daughter of Deep Silence: A Review”