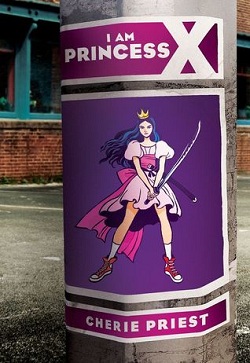 May and Libby created Princess X on the day they met in fifth grade. Libby drew Princess X while May created the stories. Together they made sure that Princess X became an indelible part of their childhood.

That was before Libby and her mother died in a car crash.

Now May is sixteen and looking at another long, lonely summer in Seattle with only her dad for company. That changes when she spots a Princess X sticker on the corner of a store window. Suddenly she starts seeing Princess X everywhere.

When the stickers lead to IAmPrincessX.com, May finds a webcomic with a wholly new but not unfamiliar Princess X. In the comic, the princess’ story is eerily similar to Libby’s. And filled with clues only May recognizes.

Which means that the only person who could have created the comic is May’s best friend–Libby–who is still alive and needs May’s help in I Am Princess X (2015) by Cherie Priest with illustrations by Kali Ciesemier.

I Am Princess X is Priest’s first novel written for a young adult audience. Accompanying illustrations by Kali Ciesemier bring the story found in the Princess X webcomic to life and integrate beautifully with May’s search for Libby in this utterly satisfying read.

May is a spunky, capable heroine who finds help from likable and well-realized characters along the way including Patrick, a likable hacker with a possibly biased sense of his own computer skills.

Priest offers a tantalizing, page-turner of a mystery that seamlessly spans real locations in Seattle and dark pockets of the internet. Even when the action moves online, Priest keeps the story exciting and approachable without ever resorting to technical jargon. I Am Princess X is filled with references to technology and pop culture but manages to still feel timeless in a way that guarantees this one will appeal to readers for years to come.

This book strikes the perfect balance between believable and sensational as May follows the comic’s clues to find out the truth about her best friend. It’s also worth noting that I Am Princess X is a story firmly grounded in friendship as readers learn more about May and Libby. There is no extraneous romance subplot to be found here. Furthermore Priest’s characters are naturally (and realistically) diverse throughout the novel.

I Am Princess X is an excellent book with loads of cross-genre and cross-format appeal. Highly recommended.

Possible Pairings: Dial Em for Murder by Marni Bates, Shift by Jennifer Bradbury, Not If I Save You First by Ally Carter, The Devil You Know by Trish Doller, Charlie, Presumed Dead by Anna Heltzel, This Raging Light by Estelle Laure, We Were Liars by E. Lockhart, Lock & Mori by Heather W. Petty, Shadowshaper by  Daniel José Older, Pretending to Be Erica by Michelle Painchaud, Daughter of Deep Silence by Carrie Ryan, Wild Awake by Hilary T. Smith, Missing Abby by Lee Weatherly, Black Dove, White Raven by Elizabeth Wein, Wherever Nina Lies by Lynn Weingarten, The Space Between Trees by Katie Williams, Paper Valentine by Brenna Yovanoff, How to Save a Life by Sara Zarr