Last month’s Blind Date with a Book display was a stunning success. I have never had to restock a display so often. I have never gotten so much positive feedback.

Unfortunately even if I had wanted to keep the display going, the level of work involved was unsustainable. I plan to bring something similar back for Banned Books Week and also for Halloween (masked books anyone?!) and of course next Valentine’s Day. In the mean time I decided to keep things simple.

This simplicity also stems from the fact that someone walked out of the library with one of my Blind Date with a Book signs. No one knows when or how it was stolen but it is gone. That smaller display is also by a heating vent and too small to accommodate the foam core I use for my display table. Instead of trying to find a new piece of cardboard I decided to commandeer a plastic sign holder and just use that to hold the sign display since that part is always 8.5 by 11 anyway.

For March I wanted something simple and after tossing around some ideas on Twitter I decided I wanted to do a color based display.

Here’s what I came up with:

If you think too long about the display text, it’s going to fall apart because the “red” should really be “read” if we are going by the old joke. But I really wanted to have black and white and red books so I just went with it.

The backing for my big sign is construction paper which I randomly and luckily found while assembling pieces. The actual sign was made in PicMonkey as usual and I just printed out two copies.

Here’s the smaller display (When I took this picture it was still stocked with my last four blind date wrapped books which were white so it works!): 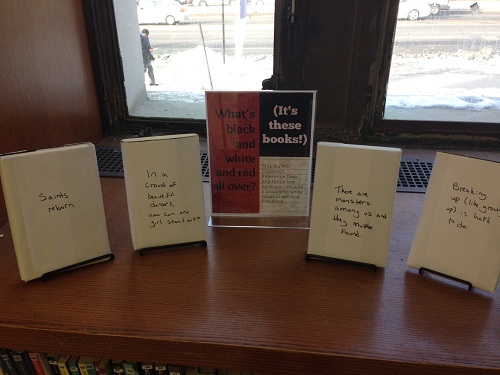 I’ll leave you all with a close up of my sign that details the giveaway option for the month as well.

What color displays have you made or seen in the library? Do you organize your shelves by color? Tell me everything in the comments!